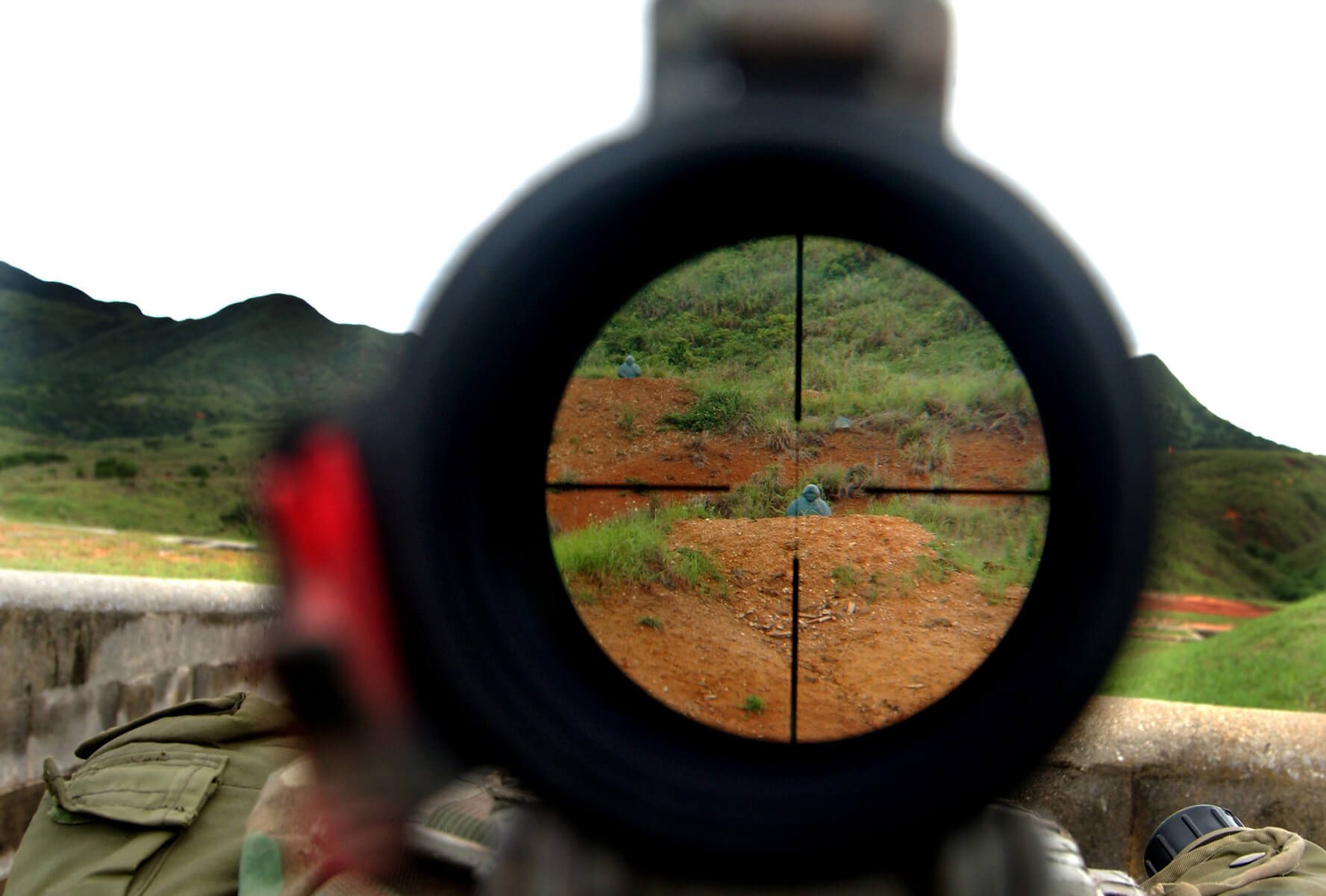 Let’s face it, sighting-in a rifle scope can be an arduous process unless you are one of those people that is a master of Yoga such that you can control both your breathing and your heart rate in addition to every muscle in your body at will. Otherwise, just like everyone else, you struggle to do it to the best of your ability by holding your body as still as you can and by controlling your breathing as well as you can.

However, even so, there are a whole host of other factors working against you such as ambient air temperature, barometric pressure, wind, and whether or not your gun likes the particular loads you are firing. But, no matter how arduous a process it may be sometimes, it is a necessary evil if you are to humanely hunt game animals and harvest them in the most efficient manner possible.

Therefore, you should be aware that there are two ways to sight-in a rifle scope and one is with a laser bore-sighting device and the other is to simply get out and shoot at BIG paper targets until you get your shots on the paper and then fine tune from there. However, I personally prefer to use a combination of both procedures to ensure that my rifle is as accurate as possible and to save ammunition.

Consequently, I like to start out with a laser bore-sight which consists of a laser contained inside of metal tube that is designed to fit into the muzzle of your rifle barrel. These units usually look something like an aluminum knitting needle with a flair at one end that transitions to a significantly larger tube with a hole in the end for the laser to exit. Thus, to use one of these devices, you first hang a special, reflective, target at a prescribed distance and at a height even with the muzzle of your rifle when it’s sitting on your bench rest.

Then, you chose the appropriately sized collet bushing that most closely matches your bore diameter and slide said collet bushing onto the slim end of the laser bore-sight and then slide the collet into the muzzle until the crown of the muzzle meets the flair in the body of the bore-sight. Then, you turn on the laser, sit behind your rifle, aim the laser at the center of the reflective target while looking through your scope and then, adjust your reticules to meet the laser in the center of the target and poof! Your rifle scope is now sighted in! Well, more or less anyway. 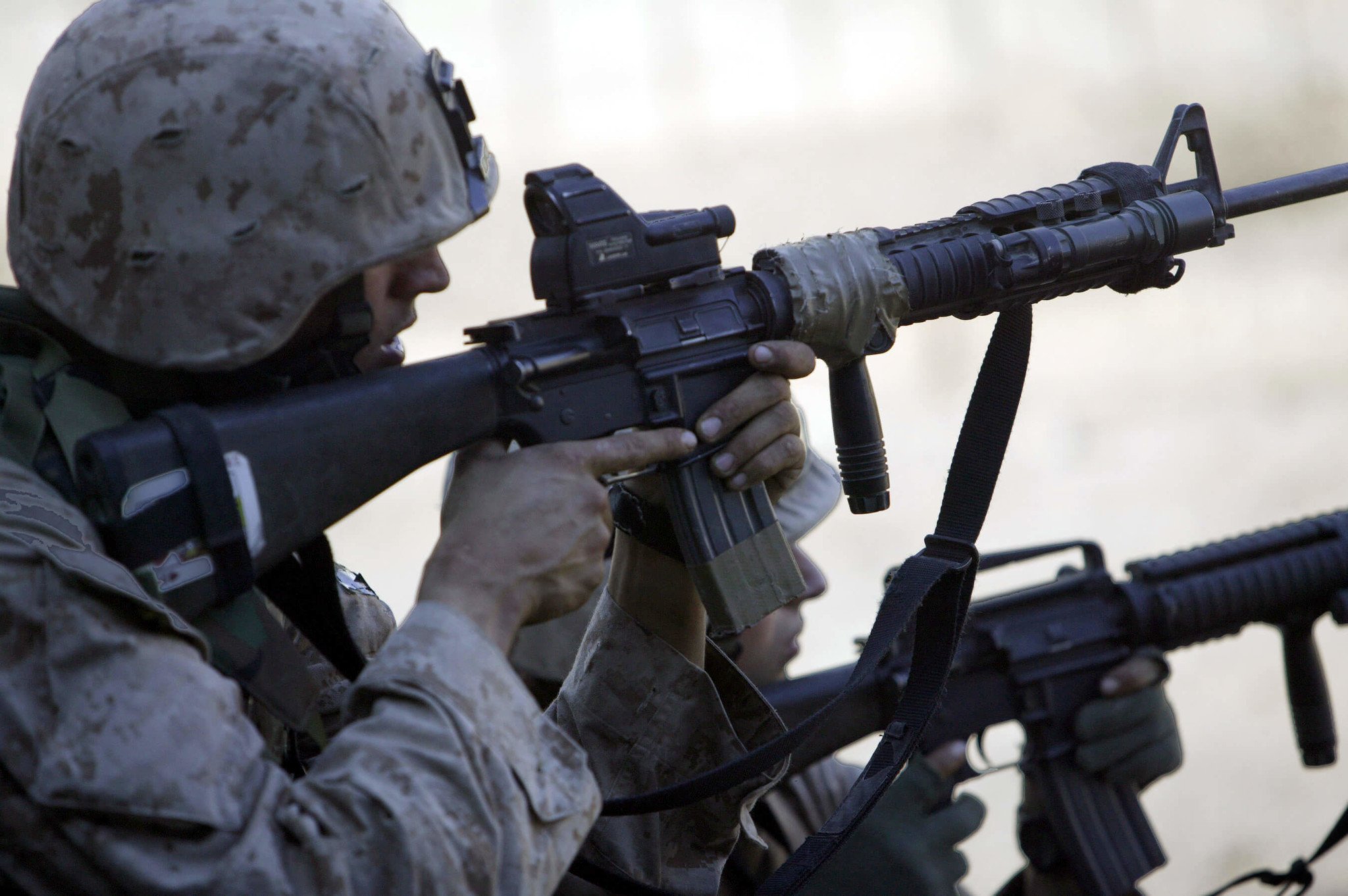 However, this system of sighting in a rifle scope does leave a considerable margin of error and thus, I like to combine this method of sighting-in a rifle scope with the other method by actually taking my rifle out and shooting it at paper targets from a bench rest after using the laser bore sight to “get it on the paper”.

Also, it is best to start with several different brands of ammunition with different bullet weights but, this can be somewhat expensive these days with the advent of the gun lobbyists coming to the conclusion that if they cannot stop the manufacture and sale of firearms, they can at least tax the ammunition to point where is it prohibitively expensive to own a gun because you cannot afford to shoot it.

Therefore, I prefer to reload my own ammunition because, that way, I am personally responsible for the quality control and it is much easier to load small lots of a particular load to see if my rifle likes it or not (I know that sounds crazy but it is absolutely true!). Therefore, I like to head out to the range with several different loads with different brands of bullets and different bullet weights because all rifles will have a distinct preference for one particular brass, primer, powder, bullet combination. Then, by shooting my guns favorite loads at a paper target and viewing the impact points through a spotting scope, I can then make minute adjustments in my reticules to correct any error introduced by using the laser bore-sight.

But, as I mentioned previously, in order to accurately sight-in a rifle scope using live ammunition, you are nearly required to have the skills of a Yoga master and that is why benchrest target shooting is such a refined sport with special guns, scopes, ammunition, gear, and shooting jackets that literally look like the strait jackets used in asylums. But, for the rest of us, first and foremost, you must be comfortably positioned behind the rifle and your bench rest must be high enough that you do not have to crouch down unnaturally to place your shoulder against the butt of the stock. Also, hearing protection is of paramount importance because, contrary to popular belief, it is not the recoil that causes shooters to flinch but, is instead the noise from the muzzle blast.

Thus, wearing good hearing protection will greatly improve you aim because you are no longer anticipating the sharp, loud, noise when you pull the trigger. So, after seating yourself comfortably behind the rifle and donning your hearing protection, assume your shooting position, acquire the target in the scope, place the reticules on the center of the target, take several deep breaths and then let the last one out half way and then hold it, steady the crosshairs on the target, and SQUEEZE the trigger. Then, check the shot placement through your spotting scope. If the shot is way off of center, then fire another shot first before adjusting the reticules because you may have inadvertently flinched.

Then, if the second shot lands near the first, adjust your reticules accordingly and, as a general rule, one “click” on the scope turret equals 1/4” of adjustment on the target at 100 yards. Thus, if your target is exactly 100 yards away and you are three inches high and two inches right, then you would adjust your horizontal reticule up twelve clicks and you would adjust your vertical reticule right eight “clicks”. In other words, you always adjust the reticules toward the point of impact. Last, it is also important to be aware that extra hot weather can actually increase the power of your gunpowder and thus cause your shots to land a little high and extra high humidity can decrease the ballistic coefficient of your bullet and thus cause your shots to land a little low. In addition, shooting either uphill or downhill will cause your shots to land high because, although the flight path of the bullet is actually the same when shooting uphill or downhill as it is when you were shooting on a level plain, gravity only affects the bullet as if it were traveling a horizontal flight path.

So, as you can see, sighting-in a rifle scope can be either a very simple or a very complicated process but, the better the job you do, the more accurate your rifle will be and accurate shot placement is paramount to humanly harvesting game animals.

Thus, for those of you who would like to practice your shooting skills but lack the unlimited fortune to purchase large quantities of factory ammo, I would suggest that you consider purchasing either a high quality .22 caliber air rifle or a .22 LR with a good quality scope for use as a training rifle because you will be able to fire hundreds of rounds from such rifles for a fraction of the cost of firing your centerfire rifle and the skills that you gain will help you immensely in your pursuit of larger game.