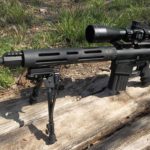 Whether the 5.56 is better than the 7.62 is an age-old question that continues to spark heated debate. But all that needs to be said is that the military chose the 5.56 due to the ability to carry more ammunition, shoot more accurately, and wound the enemy more effectively (wound ballistics). The fact remains that the 5.56 (.223 Remington or NATO designation 5.56 x 45mm) is very efficient inside of 100 meters, but at greater ranges, there are some well-documented issues. However, there is a plethora of platforms that combat this claim.

Click here for the Best 308 Assault Rifles available in 2021!

Both calibers are proven battle platforms and the subject of hot discussion. It remains controversial whether or not they are a better standard issue service round for the military.

Since the 7.62 caliber is better for reaching out and touching something, in this article we will look at the .308 Winchester and civilian assault-like rifles chambered for this cartridge.  However, more than a decade after its introduction, the battle rifles in .308 Winchester have been superseded in standard soldier rifle capacity in the U.S. Military Service by the little black M16 rifle chambered in  .223/5.56mm.

In the early sixties, the most attractive weapon for the average American hunter or sportsman was one of the many variations of Eugene Stoner’s brilliant solution.

The AR is America’s favorite carbine, and AR15 aficionados know that the original Eugene Stoner creation was a .308 Winchester AR10 which was not accepted during U.S. military trials in the late 1950s. Afterward, Stoner adapted the rifle to a smaller caliber by a scaling down the AR-10, and thus emerged the M-16 or AR-15, making its way into civilian hands. Generally, the modern AR-10 is a scaled-up version of the M-16 with most manufacturers designing their semi-automatic rifles with as many AR-15 parts as possible. 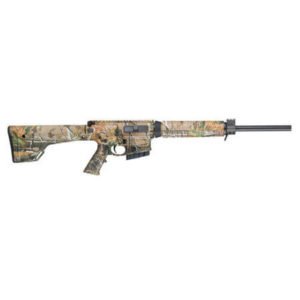 After the successful M&P15 model and its numerous variations, the famous arms manufacturer Smith & Wesson extended their line of M&P15 by offering a new version of the AR15 rifles in a potent .308 Winchester called M&P10. It should be noted that this model is not a copy of the venerable AR-10 at all, but rather an alternate AR-15. Actually, this semi-automatic rifle closely resembles the M4, a well-known military weapon and pretty close to the sensibilities of many Americans as well as avid shooters on other continents. This trusted US manufacturer introduced the M&P10 in 2013 as a more powerful option for all those who want a stronger punch from their AR carbines. On first look, there is considerable enthusiasm, mainly because the manufacturer has applied the solutions that consumers consider as most optimal.

The main feature is a mid-length gas system which is credited with a more gentle recoil and less wear and tear on the moving parts. Unlike short length carbine systems, a mid-length system makes the gun lighter and reduces recoil, resulting in a higher probability of 2nd and 3rd round hits. Also, the interior stays cleaner. Besides a mid-length gas system, the M&P10 also has a mid-length, 18-inch, non-chrome-lined but Melonite-coated barrel with a minimal effect on performance at longer ranges, but still wieldy at close quarters. The muzzle of the barrel is topped with a proprietary muzzle brake/compensator and a new patented Smith & Wesson Enhanced Flash Hider (EFH) equipped with a crenulated rim and holes behind it facing forward. Unlike its newest little brothers, M&P-15 AR’s barrel is made of a 4150 CMV (chrome-moly-vanadium) steel. The .308  M&P10 has a standard 4140 steel barrel featuring a 1-in-10-inch twist rate with 5R rifling, so it will properly stabilize any bullet weight with amazing 1/2 MOA accuracy. As for the interior, the bolt carrier, gas key, and firing pin are similar in configuration to that of smaller-caliber ARs but naturally, it is dimensionally larger, and all are chromed. 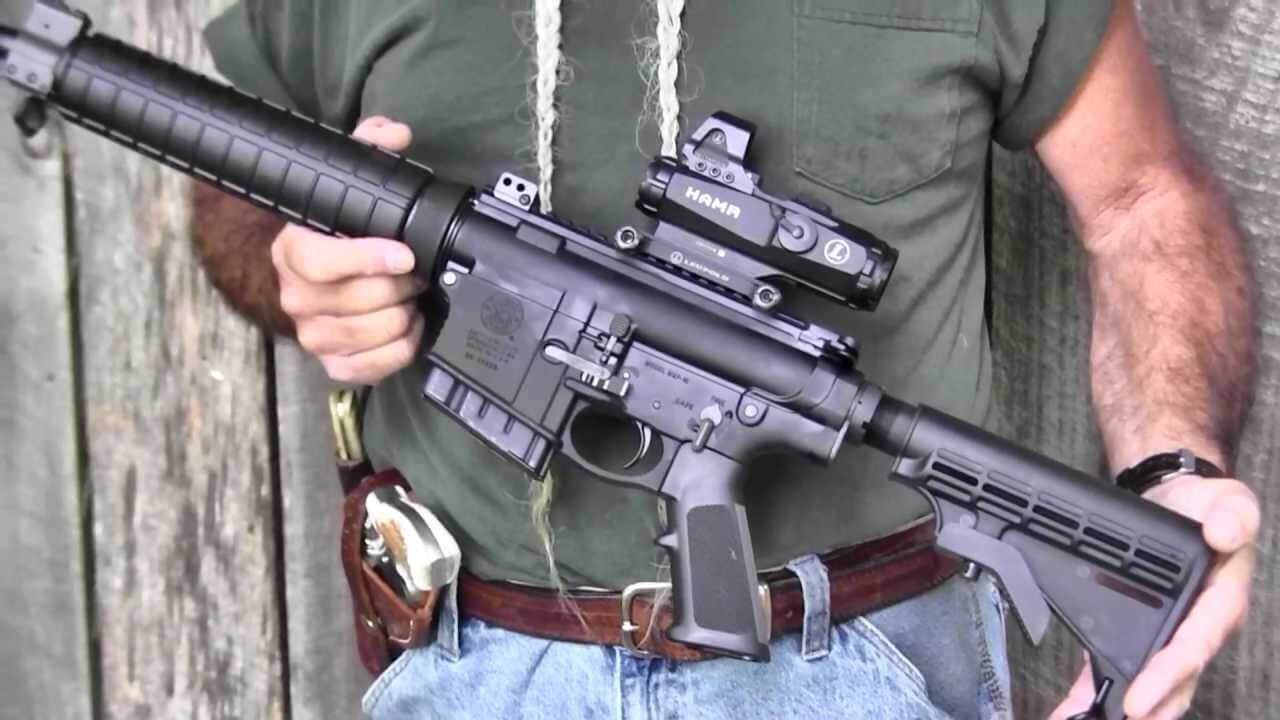 The upper receiver of the M&P10 is completely on trend as ARs of all calibers with an 8.3″ Picatinny rail covering the top of the receiver—commonly called a “flat-top” style because of its lack of a carry handle. While the flat-top allows the shooter to mount an iron backsight or a wide choice of optics or accessories, it is mated with a gas block-out on the barrel that has its Picatinny rail, so the owner has a place to put an optional detachable front blade.

The military and police 10 features a couple of advantages over almost any other AR-type rifle. For example, it has ambidextrous controls for the magazine release, bolt release, and safety-selector levers, so operation with either hand is easy and straightforward. One of the few shortcomings is that the safety levers use small Allen screws which can become loose during use, but this problem can be easily overcome with a little thread locker.

The S&W sell this model equipped with Magpul 10-round detachable magazine, which some owners claim is a shortcoming because they advocate high-capacity magazines (20-30 rounds) instead of the standard 10-rounds in the factory package. 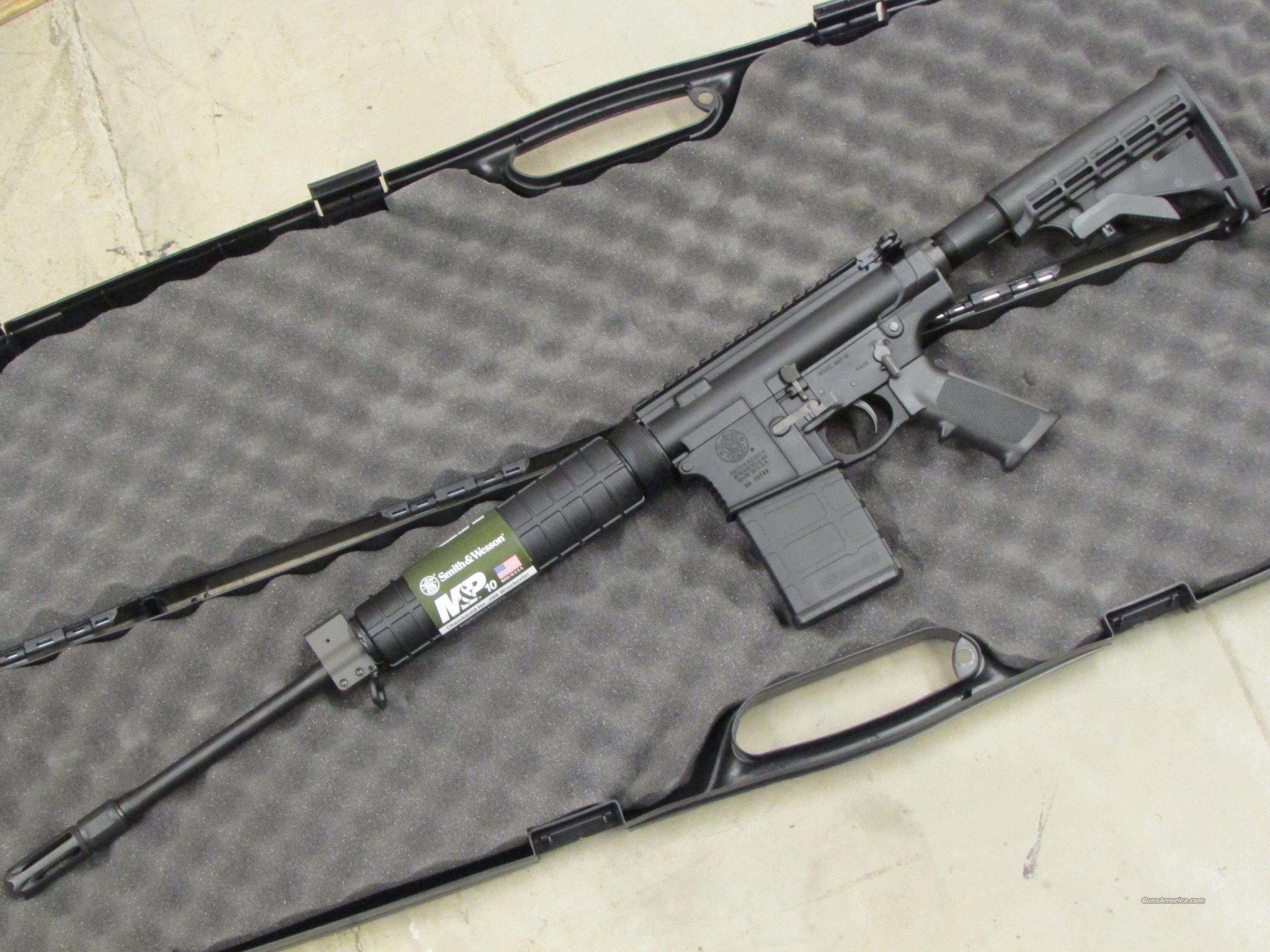 The M&P10 includes a functional six-position collapsible stock of standard M4-style, which is not particularly comfortable. However, the myriad aftermarket options enable the shooter to choose optional components.

This rifle has a base weight of 7-3/4 pounds and has substantially less recoil than a similarly sized bolt-action rifle like the Remington Model 700, due to its gas-operated mechanism.

As a final note, the M&P10 has been created as an all-purpose utility rifle, chambered for the potent .308 Winchester cartridge, with the same lightweight, accurate, fast-handing rifle capabilities that assure more downrange killing power than a smaller-caliber AR. In accordance with this, the S&W M&P10 is an excellent choice for hunting, target shooting, or as a home defense rifle.

Check out this review of the M&P10 found on YouTube: 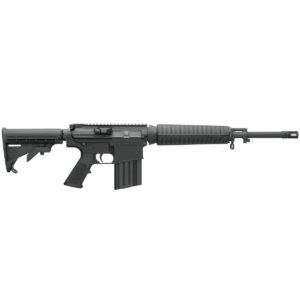 Bushmaster Firearms International, established in 1973, is one of most well-known rifle and pistol manufacturers based on the traditional AR-15 pattern. They are a very popular manufacturer of semi-automatic rifles in the United States. As part of a joint venture (Remington Arms Co., Marlin Firearms, DPMS, Dakota Arms Co.) with the same owner (Cerberus Capital Management), Bushmaster previously had common projects with Remington Arms Co. in the form of the 5.56mm Carbine Bushmaster ACR or Remington ACR. In this case, the rifle name ACR stands for “Adaptive Combat Rifle.” However, in 2010, when Bushmaster released the new big brother of ACR, an entry-level AR-10, they dubbed it ORC (Optics Ready Carbine), which is not a rifle but rather a weapon platform. Most American riflemen are familiar with the AR15 concept and would instantly recognize everything on this Bushmaster .308  platform, such as the classic heat-shielded oval hand guards and the proverbial 6-position collapsible butt stock.

At first glance, the two ½-inch scope risers  attract attention because the Optics Ready Carbine comes with no sights at all, and these Picatinny risers specifically help to install optics with low-profile rings. Of course, the flat-top upper receiver is supplied with a Picatinny rail, enabling the user to mount an aftermarket optic, iron backsights, or an endless variety of accessories.

Designed as a mid-range carbine, the ORC uses a traditional gas impingement system that comes with a mid-length gas system and a low-profile milled gas block on which can be mounted a flip-up front sight.

This best 308 assault rifle in the venerable .308 Win chambering has a 16″ chrome-lined barrel with a 1-in-10 right-hand twist made of a heavy profile, 16-inch, 4150 chrome-moly vanadium steel, which is significantly harder than 4140 steel. The top of the muzzle ends with an A2 style birdcage flash hider.

With an overall length of 37.25 inches and weighing in at 7.75 lbs. without a magazine, the .308 Winchester Bushmaster ORC is relatively smaller and lighter than most other rifles chambered in a .308 Winchester. However, this great AR option due to its lightness suffers from noticeable recoil, although adding an M-4 buttstock recoil pad can help to make it a much more comfortable shooting experience. 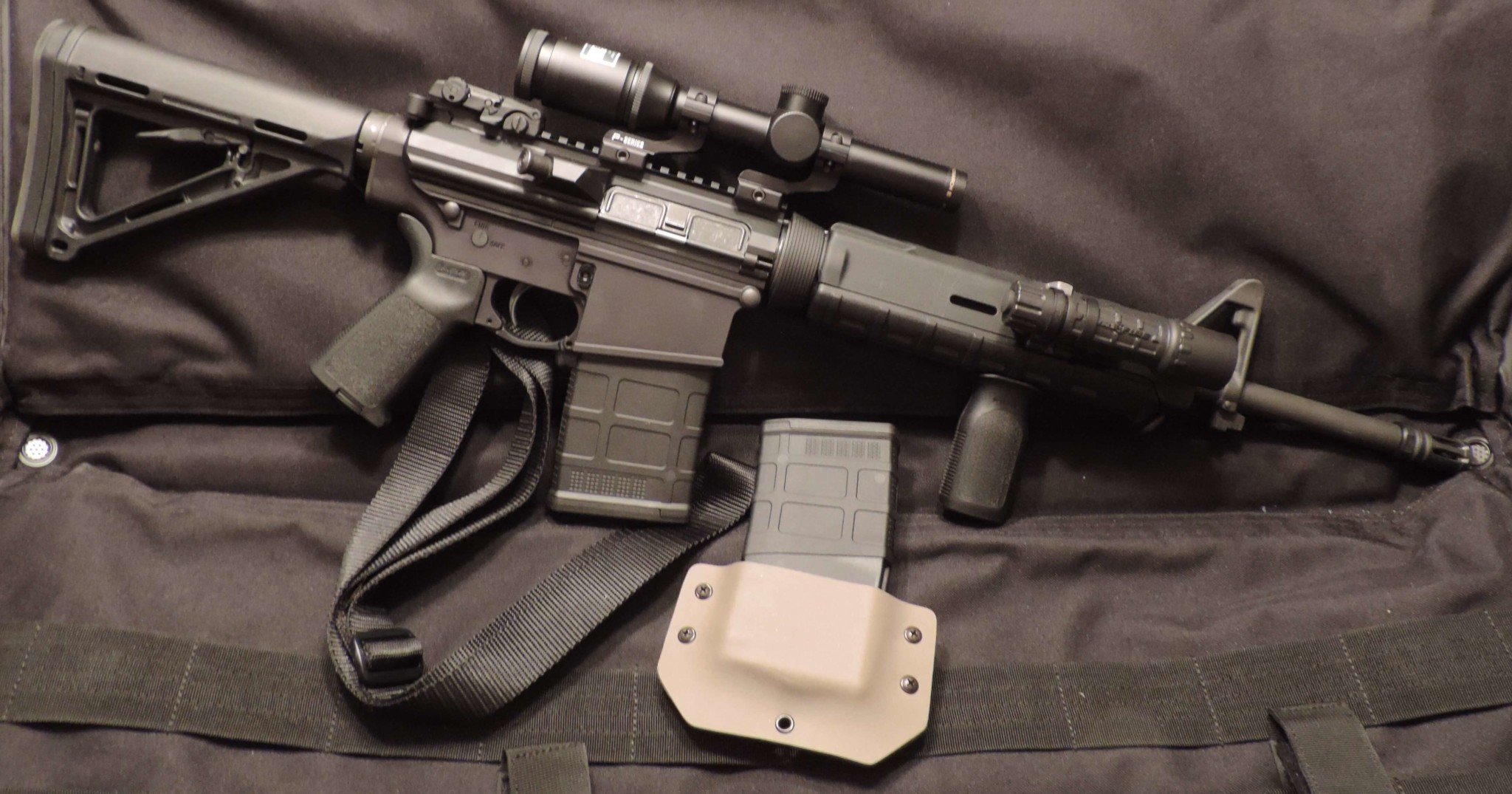 In addition to the classic profile of the AR-15, the Bushmaster .308 ORC mimics the craftsmanship and finish of all the other AR carbines, maintaining the standard quality of these products. While several minor problems were reported with the earlier Bushmaster best .308 assault rifles, such as breaking of the extractors and damage to other small parts with rough use, today the only real complaint is that the gun for end had a little wobble to it, but with minimal effect on accuracy. Furthermore, on reading numerous reviews, we found just one complaint relating to the lack of customization options commonly found on the AR platform rifles.

Check out this overview of the Bushmaster ORC Rifle found on YouTube:

As the saying goes “Switzerland does not have an army, it is the army itself.” The firearms giant SIG-Sauer Company (Schweizerische Industrie Gesellschaft) has been providing weapons for years to Swiss citizens and soldiers as well as other armies around the world. In addition to military weapons, SIG is known as a quality producer of excellent handguns and more recently as a manufacturer of self-loading rifles.

The ruggedly built 7.62mm SIG carbine is an example of superior craftsmanship and avant-garde engineering. It is equipped with a 16-inch hammer-forged barrel and an aluminum free-floating quad rail forend. For corrosion resistance and durability, the SIG has a chrome-lined 716 chamber and barrel. The heavy barrel features a relatively fast one-in-ten twist rate that works well with every loading, including heavyweight match bullets. 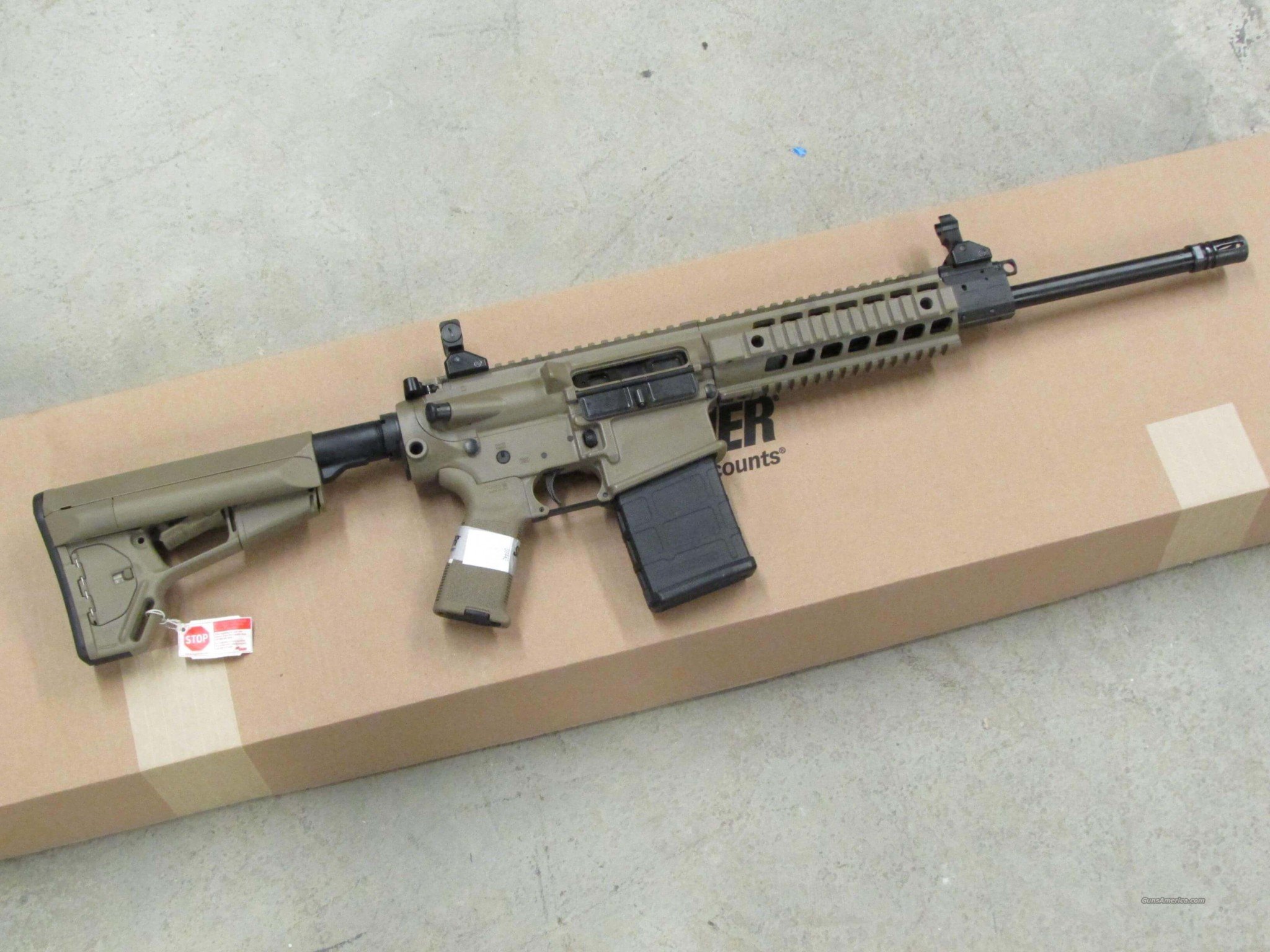 The primary characteristics of this very well made special purpose AR-10-style carbine is its gas piston operating system. In other words, the SIG engineers modified the standard AR’s direct impingement gas operating system using a short stroke pushrod that cycles the bolt of the massive chunk of machined steel. In this way, the 716 gun stays clean and lubed long after firing more ammunition downrange than the competition. Nowadays, the concept of piston-driven AR rifles has been adopted and applied in several AR-pattern rifles.

Besides this specific, the SIG .308 version shares several other similarities with its older brother, the 5.56mm, but the 716 isn’t simply a scaled-up version of the 516. Both rifles are equipped with flip-up backup-type iron sights and Magpul PMAG magazines in their respective calibers. Although it is not an essential part of this weapon system, it is important to note that these magazines are considered the best on the market and our experience using them with other guns has been great. While the fire selector is on the right side only, the magazine release buttons are ambidextrous, and the big SIG is also fitted with a Magpul pistol grip and a Magpul retractable stock. With its modern blocky appearance and heavy barrel, the SIG716 at nearly 9.5 pounds is two pounds heavier than the SIG516 and almost a pound more than most .308 military-style, or to be more politically correct, modern sporting rifles. On the other hand, thanks to its weight, the SIG716 produce a tad more recoil than the 5.56mm NATO/.223 Remington caliber weapons. 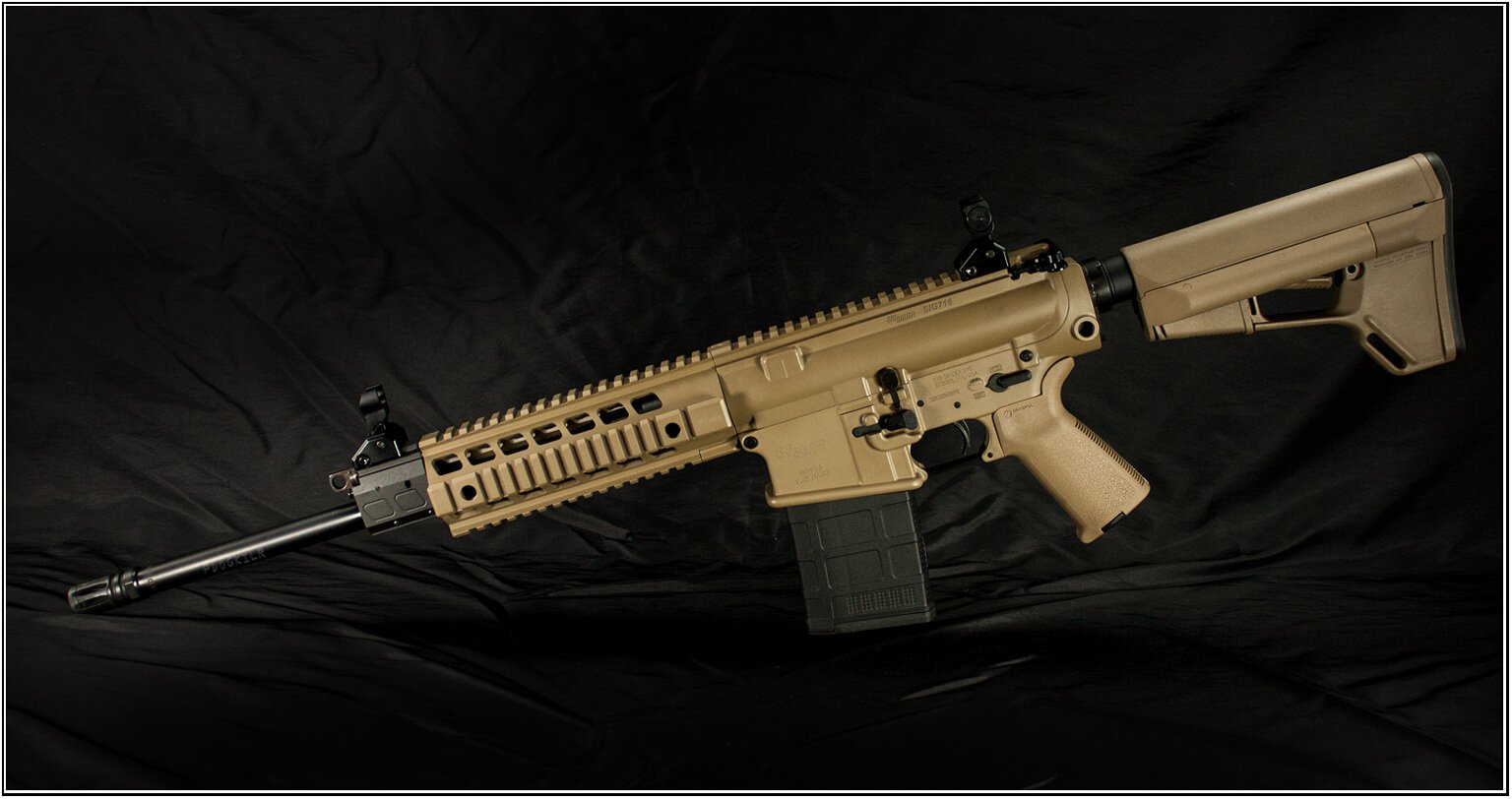 The flawlessness of the mechanism is proven by the steel-cased ammo which can be problematic in some self-loading rifles, but the SAUER 716 Patrol Rifle gobbled it up with no issues.

For many years, SIG battle rifles have been labeled as the “Rolls-Royce of rifles,” but whether the same will be true of the civilian version remains to be seen on shooting ranges and hunting grounds around the globe.

Check out this video of the SIG 716 found on YouTube: