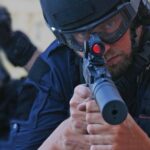 They have proven their worth over time and have become the go-to red dot sights for different functions.

Out of the 5 Aimpoint’s we review below, our favourite top 3 best Aimpoint sights are:

When picking out a red dot sight, you have to know what you are planning to use it for. Whether it is for hunting, defense, law enforcement of private security, you have to have an idea of the features that you will need in the red dot sight.

Aimpoint provides a wide variety of options to the users and one can find something to cater to their needs.

All this definitely depends on the budget that one has. Some of the best Aimpoint sights include:

This red dot sight weighs just less than four ounces which is pretty light. The light weight does not translate into light features.

The Aimpoint H2 has the necessary features that one can find on any high end red dot sight. It does not have many mounting options of numerous features as compared to other red dot sights on the market.

However, the light weight of the Aimpoint H-2 allows the user to increase negligible weight onto the AR 15, the best suited rifle for the red dot sight. It therefore allows one to carry the rifle on long distances, even long hikes, without adding more weight to the rifle.

The Aimpoint H2 runs on durable lithium ion batteries which are included in the purchase. It is reasonably priced for the value for money that one receives at the end of the day.

This red dot sight is best suited for carbines, submachine guns and short barreled shotguns. It is highly demanded for close quarter’s battles. It has four night vision settings and eight days time settings. It captures the eye of the shooter and makes for easy viewing regardless of t

he light conditions due to the wide 4 MOA red dot sight. The Aimpoint Micro T-1 is also lightweight. It weighs 3.7 ounces and is unnoticeable and quite manageable. It does not bog down the gun and is reasonably priced for the features it has to offer.

The Aimpoint Micro T-1 works just as well as other high end red dot sights. It is highly durable, being submersible up to 80 feet, does not build up on fog due to the nitrogen purging it possesses and is shockproof.

This triple threat places the Aimpoint Micro T-1 in the same league as other larger models of red dot sights.

Like its counterpart, the Aimpoint Micro T-2 is a lightweight, adding very little to the rifle.

It is small and compatible with very many night vision devices. Unlike the T-1, it is suitable for use with an AR 15 rifle.

It features flip up lenses and is mostly compatible for those people who like to use night vision goggles. The red dot sight also features a 2 MOA dot for clear viewing.

Aimpoint Micro T-2 has a rugged housing and exterior, making it durable and heavily protected from damage.

It also boasts of increased efficiency because of lens coatings that allow the red dot sights reflection to be at the preferred frequency. It is reasonably priced, although it does not have many mounting options as compared to other red dot sights on the market.

The Aimpoint M4S has been largely adopted by the U.S. Army and has featured in prominent battles such as those in Afghanistan. It boasts of 16 different brightness settings for both night and daylight use.

One of its greatest advantages is that it is compatible with different night vision equipment but with many other magnifiers. It is, however, heavy. It weighs about 11 ounces, which tends to add some bulk to the equipment it is paired up with.

The Aimpoint M4S is simple in its operation. It has one button for turning on and off as well as for adjusting different brightness levels. It uses simple double A batteries which can last up to five years as the device does not suck up a lot of battery power.

The optic is reasonably priced and was manufactured for use by the police. It is suited for both close range as well as extended shots.

It uses a 2 MOA reticle which provides for precision. It also has a 30 mm objective lens which gives eye relief with the additional benefit of allowing the user to mount the red dot sight anywhere.

The Aimpoint Pro Patrol Optic is simple and has minimal controls. It comes with the weaver mount and lasts up to three years on a single battery.

It can be used continuously and is a great entry level optic for those who cannot afford the M4S.

Buying an Aimpoint product is a wise decision as the manufacturer has put in a lot of work to ensure that the devices are the best quality available. Judging from the wide use of these red dot sights in the U.S. army, it is safe to say that one can look into buying one without wondering whether it will serve the purpose. That is a pretty high standard that reassures a buyer of the authenticity, efficiency and durability of the products. However, it is always important to read online reviews as well as do some extensive research on which specific red dot sight would work best for your use.

Aimpoint red dot sights are durable and therefore one should buy one that they will be comfortable using for a long time. Regardless of the budget, one can find a red dot sight that they can afford. The cheaper ones may not have some features, but they are still as efficient as their more expensive counterparts. For such a purchase, it would be best to read widely before purchase because even the cheapest red dot sights are not entirely cheaper, just relatively cheaper than the more expensive ones.