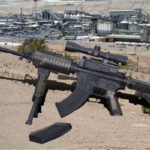 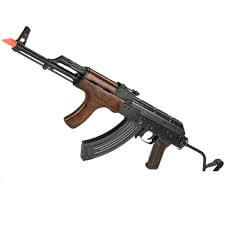 Most Russians would say that the best rifle is their AK 47 or Kalashnikov and if you want to play Russian, play with the best airsoft AK47 and experience this selective fire rifle with Russian flavor.

The first AK47 was developed in the Soviet Union by Mikhail Kalashnikov, hence the name of course.

The AK47’s design was considered as a hybrid or combination of all rifles during its time (combining features of M1 from the Americans and StG44 from the Germans). As technology improves, so is the mechanism of AK47 and after the war, it remained as one of the most popular rifle in the world of firearm users.

Today, most shooting games like airsoft and paintball have their own version of toy AK47. For the best airsoft AK47, here are some of the best we found on the internet so far.

Click here for the Best Airsoft AK47 available in 2021!

Here are the best ak47 for airsoft guns that you can find in the market today. 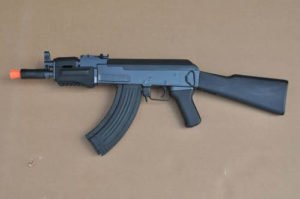 For the best airsoft AK47 that you can get for less than $100, the DE Electric Airsoft Assault Rifle is a great option. This airsoft rifle has a beautiful finish on a reliable metal body.

The DE Electric Airsoft assault Rifle comes with a high capacity magazine that can hold up to 400 rounds. The internal parts of this airsoft rifle are reinforced hence you can be sure that it will work well and you can depend on it during battles.

This DE Electric Airsoft assault Rifle weighs 6 pounds and comes with an adjustable hop up system. Most owners of this airsoft rifle love it for its design, look and performance aside from the fact that it is very affordable for an AK47 airsoft rifle.

If you want to feel how the original AK47 feels like, get the Soft Air Kalishnikov Tactical AK47. This airsoft rifle is the exact replica of the Russian AK47 rifle. Most airsoft ak47 reviews consider this airsoft rifle as one of the best AK47 replicas out in the market today.

This airsoft rifle comes with a high capacity mag that has 600 rounds. This AK47 airsoft rifle can do 330 to 380 feet per second using a .20g BB. With a lighter pellet, you can go as fast as 475 fps. For accuracy, you can take advantage of the Adjustable Spin-Up Shooting System that Kalishnikov incorporated on this airsoft rifle. For this kit, you will get a wall charger and a battery.  This airsoft rifle is a bit heavy though at 8.5 pounds. 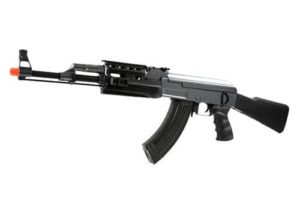 For our best airsoft ak47 reviews, the first item we have is the BBTac BT-AK Tactical RIS AEG. This rifle is made of durable metal and since it is AEG, this kit comes with a battery. For a price of more than $100 (click here for the price), you will not get a dependable AEG, you will also get an AK47 with high-cap magazine. The BBTac BT-AK Tactical RIS AEG weighs less than 8 pounds and although it is a bit heavy for a tactical AK rifle, the performance outweighs its weight.

This AK47 airsoft rifle also comes with a wall charger. A regular battery for this airsoft rifle can get fully charged in less than 30 minutes. For your shooting needs, you can use the hop on the side of this rifle too. I

f you are buying a rifle because you want to feel a kick when pulling the trigger, this AK47 rifle doesn’t have that effect so you might want to look for a different airsoft rifle. The BBTac BT-AK Tactical RIS AEG has can do 380 to 450 feet per second with a .12 BB pellet. This muzzle velocity can be reduced if you will be using a heavier pellet like a .20g BB. If you just happen to want an AK47 for a change, this one is a good option.

Now that you have been introduced to the best airsoft AK47 for airsoft from three different brands, it is time to make your pick. If you want power, design and superiority in terms look and performance, you can choose from any of the three AK47s above.

If you are still not contented with these, you can continue to check some of the airsoft ak47 reviews online to get more information about the most popular AK47s in the market today.