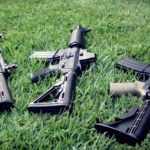 Airsoft rifles are firearms that were made to look like a real rifle. It is a specially designed gun and it is used in airsoft games. Airsoft guns use different technical solution to make it work like using compressed gas, spring driven platform, electrical piston and hydraulics. These mechanisms are used to drive a pellet (bullet for airsoft rifles) go on air and make spherical projectiles. Each of the best airsoft assault rifles that you can find in the market today are designed to be non-lethal.

Click here for the Best Airsoft Assault Rifle available in 2021!

Let us take a look at some of the top 5 airsoft assault rifles that you can find in the market today. 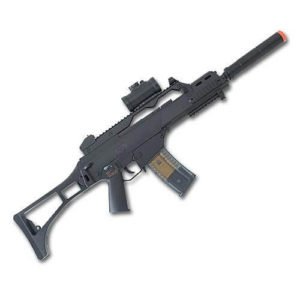 This assault rifle from Double Eagle has a price tag of less than $60 (click here for the price). This airsoft rifle is the exact replica of X36 and a complete kit of M85P AEG Electric Airsoft Gun Rifle comes with magazine, charger and battery. For more seasoned shooters who take advantage of other shooting accessories, you might enjoy the bonus that comes with this rifle such as the vertical grip, red dot scope and the flashlight. This rifle uses BB’s and it has a speed of up to 250 fps when shot with a .12g 5mm BB. If you want to learn target shooting at home and you have a spacious backyard to spend your mornings and afternoons, this rifle from Double Eagle is a great rifle to have. This airsoft rifle has a dimension of 32 x 4 x 12 inches and it weighs  4.6 pounds.

Different airsoft assault rifle reviews have listed Crosman as one of the best maker of airsoft rifles and pistols. Crosman is a New York based company and has been working in producing products for shooting sports, ammunitions and air guns. Crosman is also popular in the market for producing BB pellets for its rifles and pistols as well as for other brands. If you are looking for best airsoft assault rifle for the money, the Crosman Stinger R37 Spring Powered Tactical Airsoft Rifle is worth trying.

The Crosman Stinger R37 Spring Powered Tactical Airsoft Rifle is very affordable for only $ (click here for the price). It has adjustable and removable stock. One look at this rifle will tell you that it is not real but once you fire it, you will feel the impact of how a rifle really works. This airsoft assault rifle of Crosman has a quad rail to make mounting easier. One thing that I love with rifles is the magazine and its capacity, eliminating the need to keep on reloading especially during a shooting game. The magazine of the Stinger R37 Spring Powered Tactical Airsoft Rifle can hold up to 400 airsoft BBs. This rifle also comes with a removable aiming optic for added accuracy. Because of the possible danger that airsoft brings this is not allowed to be carried around and be shipped in New York. If you are planning to order airsoft rifle, check with your local law if this is okay and not punishable by law.

For the best airsoft assault rifle that doesn’t costs much and is from a reputed manufacturer, I highly recommend the BT-M82 Airsoft Electric Gun Assault Rifle from BBTac. BBTac has been making sports products especially in the shoot sports and airsoft is one of their signature products. Different airsoft assault rifle reviews have been looking up to BBTac in terms of their airsoft rifles especially with the BT-M82 Airsoft Electric Gun Assault Rifle.

The BT-M82 Airsoft Electric Gun Assault Rifle is indeed one of the best airsoft assault rifles in the market today being a full replica of SIG 552 Commando carbine rifle. This uses BBs to fire and its magazine can hold up to 36BBs per round. The power of this rifle releases BBs at a speed of 340 fps. Being a rifle, you can choose from the three firing modes available – go on one shot at a time with the safety click on, go on semi-automatic or go full automatic. The complete package of the BBTac BT-M82 Airsoft Electric Gun Assault Rifle has a price tag of $ (click here for the price) and with it comes a red dot scope and a silencer. This airsoft rifle has a dimension of 36 x 4 x 12 inches and weighs 6 pounds.

Owning one of the best airsoft assault rifles is one of my dreams aside from being an accurate shooter and a marksman. I achieved the last two with constant practice while the first one, it took me years to figure it out. The SR01 Spring Powered Rifle is my third airsoft rifle and it was just then when I finally admit that I am now holding a great assault rifle in my hand.

This airsoft assault rifle from U.S. Marine Corps is one of the cheapest airsoft rifles I have too. The affordability and performance are probably the reasons why I look up too much on this rifle. This rifle is spring powered and has removable flip-up sights. For a price of $ (click here for the price), the kit also comes with a mounting rail, a flashlight, camera and a magazine that can hold 350 airsoft BBs. For long term target shooting and shooting games, this airsoft rifle will surely keep you alive in the game. Because of its realistic look and design, this airsoft is not allowed to be shipped in New York hence before ordering, make sure that your state law allows airsoft shipment.  What is the best airsoft assault rifle that can do up 350 fps? Marines Airsoft SR01 Spring Powered Rifle will surely keep you at the top of your game with less need from reloading and since it only weighs 1.7 pounds, you won’t even get burden carrying it.

The last item in our list of best airsoft assault rifle is the Tactical AK47 Electric Powered Airsoft Rifle from Kalishnikov. This air rifle costs below $150 (click here for the price). It is a special Kalishnikov release and it comes with the Kalishnikov trademark logo. For this package, you will get integrated rails, fore grip that is foldable and removable and a nylon fiber foldable stock. The upper receiver and barrel of this rifle is made of metal as well as the gearbox. With its electric power, this can go as fast as 380 fps with a .20g BBs.

Things to consider in choosing the best airsoft rifle

The price – before going ballistic over an airsoft because of its affordability, check first what the said airsoft is for. Choosing your airsoft rifle should not depend on the price that you can pay but rather on the feature of the airsoft that you need. For starters, investing in a so-so gun (cheap models) is recommended since you are still in the process of getting to know the sport and how airsoft works. Besides, if you break it, it would not hurt much because you did not pay much for it.

What it is for – although airsoft rifles are for game or sports, there are different types of airsoft games that you should be familiar with. At least you should know what kind of airsoft game you will be playing with or interested with before you can decide on the best airsoft to buy. Airsoft games means knowing your particular role and position and your gun should depend on that role.

The models of airsoft riffles – you might not want to end up buying a new airsoft rifle only to find out that it is an old model of the M16 series. Before making a purchase, ask the one assisting you if they have the newer models so you can choose from it. In addition, do not rely on brand names when choosing the best airsoft assault rifle, check different airsoft assault rifle reviews as well and consider the less popular brands with great reviews.

The weight – before buying an airsoft rifle, carries it and tries it with your own hands. You might not want to end up with a rifle that it is hard to carry or will cause your arms to have cramps after an hour of playing because of its weight right?

Before paying for the best airsoft assault rifle that you found, make sure to do the few steps mentioned above, carry it, try it and compare it with other brands of airsoft rifle. Reading airsoft assault rifle reviews can definitely help but do not put everything on reviews because personal experiences still vary from one person to another. If you have time and you knew some places where airsoft sport is being offered, go there and check out the different airsoft rifles they have. Rent it and try until you find the one that is comfortable to use.