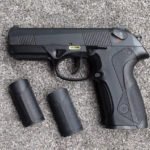 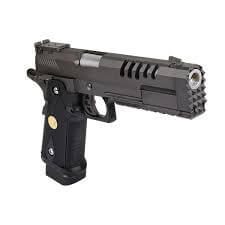 As the world and technology evolves, so is the way that airsoft guns are being developed and manufactured.

We have seen how gbb or gas blow back airsoft rifles and pistols were introduced as well as the electro-pneumatic gearbox rifles.

The main reason for these changes according to seasoned airsoft users is that it gives a more realistic feeling when shooting.

For example, the best airsoft gbb pistol has a recoiling effect that you can feel when firing a real pistol. If you are using a rifle, you can feel that recoiling effect on your shoulder, something that regular airsoft guns doesn’t really have. Gbb’s also makes that scary sound (AEG rifles produces scarier sound) that can make your opponent tremble once they hear it.

Click here for the Best Airsoft GBB Pistol available in 2021!

Here are some of the best gbb airsoft pistols that you can find in the market today. 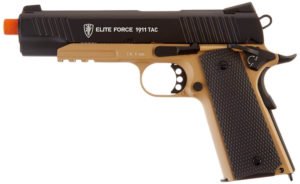 Most airsoft gbb pistol reviews point out that there will be a time when gbb ammo will get cheaper and more affordable as compared to other types of airsoft ammos.

If you are optimistic like them and you still want to try your hands on a gbb pistol, you can check out the 1911 TAC Gen3 Airsoft Pistol from Elite Force. This pistol is made of full metal.

It features a front cocking system and a fast draw diamond grips. Unlike other airsoft guns that stops working during cold weather, you can still expect great performance from this Umarex pistol. This pistol features a beavertail-like safety grip and it comes with ambidextrous safety, something that left handed users can use. This gbb pistol uses 12gram C02 cartridge and is considered by most owners as one of the most powerful blow back pistols they have used so far. For its affordable price of $ (click here for the price) for a bbg, this is indeed one of the best airsoft gbb pistols in the market today. 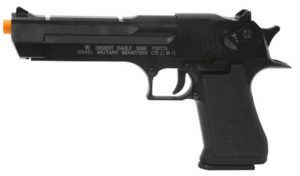 For the best airsoft gbb pistol for the money, you can try your shooting power with the Full Auto Airsoft Pistol from Desert Eagle.

Desert Eagle has been known for making quality sports products like airsoft rifles and pistols and the Full Auto Airsoft Pistol is another testament of their commitment to their craft. For a price of $ (click here for the price), Desert Eagle is sure that they have produced one of the best gbb airsoft pistols so far.

The Desert Eagle Full Auto Airsoft Pistol is full replica of a real Desert Eagle handgun. This is made of metal to give the users a real-like experience when holding it. This airsoft pistol comes in two firing configurations: semi-automatic and full automatic. This is a powerful gbb handgun with a velocity of 394 fps using a .12g BB. If you are living in New York, ordering this pistol is not allowed. Desert Eagle’s Full Auto Airsoft Pistol has a dimension of 12 x 8.5 x 2.5 inches and weighs 3.3 pounds. 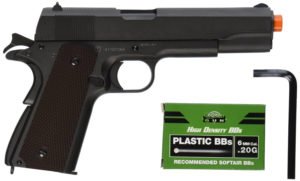 Celebrating its 100th anniversary, gun manufacturer Colt produced one if the best, if not the best gbb airsoft pistol that you can find in the market today – the 1911 Co2 Full Metal Airsoft Pistol.

This 6mm bbg airsoft pistol is semi-automatic and is made of 100% metal. The metal material aims to give user the real-like feeling when holding their pistol. For better handgrip, Colt made the handgrips textured as well.

This is a powerful blow back gun with a velocity of 344 FPS with a .20 gram BB’s. New York doesn’t allow the shipping of this product in their state so if you are living in NY, ordering this is not recommended. This best airsoft gbb pistol from Colt has a dimension of 8.5 x 6.5 x 1.5 inches and weighs 2 pounds. This can be yours for less than $100 (click here for the price).

The advantages of using GBB pistol

GBB pistols are more expensive as compared to AEG and regular airsoft pistols. Basic gbb pistol can cost up to $140 while a magazine costs at least $40. The gun itself is cheap but the magazine is not. Hopefully, there will be sets of cheaper magazines in the future that gbb users can use on their pistol. For now, if you want to have four sets of magazines that you can readily use for your best airsoft gbb pistol, then prepare to burn at least $160 on gbb magazine.

Different airsoft gbb pistol reviews have been questioning the fact that gbb magazine costs a lot and that there is no available cheaper version of gbb bullets. Reviewers are even pointing out that if this continues, gbb might lose the battle to AEG and EBB’s. For those who want to feel the excitement and adrenaline rush of firing a gun with a real-like impact, just continue using your gbb’s because who knows, someone might just come up with a cheaper gbb magazine product in the future.