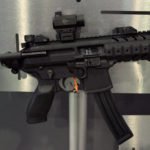 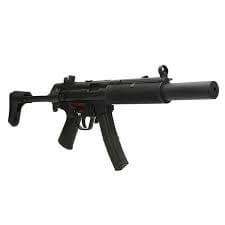 If you want to go German during a close quarter battle, going for the best airsoft MP5 rifle is one of the first steps you should take.

MP5 also known as Heckler & Koch MP5 is a German 9mm submachine gun introduced to the German and international markets in the 60’s.

When it was introduced, it quickly rose to fame as more than 40 nations started adapting it and giving it to their military forces for use.

The MP5 is so far one of the most popular submachine gun in the market today. For this reason, when paintball games and airsoft games were introduced, a replica of the MP5 also became the most popular airsoft and paint maker guns.

If you are looking for an airsoft MP5 to use in your next battle, here are the top choices we have for you.

Let us take a look at some of the top airsoft MP5s that you can find in the market today.

The HK Mp5 by Elite Force features a muzzle velocity of 345 feet per second using a .20g BB as ammo. The length of its barrel is 16 inches while the entire rifle measures 27.25 inches.

This good looking airsoft rifle MP5 comes with a high capacity mag that can house 300 pellets.

This airsoft rifle weighs 12 pounds hence some users actually have to worry about carrying it for a long period of time. If you are going to join a close quarter battle, bringing in this powerful MP5 is not practical because of its weight.

If you are going to do practice shooting though, this is the top airsoft MP5 that I can recommend. A complete kit of the Elite Force comes with a battery and a charger and although it is an MP5, this airsoft rifle is compatible with an M4 magazine. 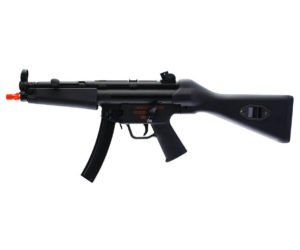 The H&K MP5 A4 Elite AEG Airsoft is a .6 caliber and promises a muzzle velocity of 360 feet per second with a .20g BB. One great feature of this airsoft rifle is its three shot burst.

This airsoft rifle also comes with the license and trademark of Heckler & Koch. This MP Airsoft rifle has a metal upper receiver. The barrel on the other hand is made of Nylon Polymer. It also features an adjustable hop and full metal gears.

This airsoft rifle weighs 6.5 pounds, so if you are planning your strategy on your next close quarter battle, the 3-shot burst of this powerful MP5 might help you win. In addition, H&K MP5 A4 Elite AEG Airsoft also has threaded barrel, ambidextrous fire selector switch and retractable stock.

With so many features on its sleeve, you will be surprise to see how compact this airsoft rifle is. The size of the H&K MP5 A4 Elite AEG Airsoft is just okay to make transporting and carrying it easier as compared to other airsoft rifles out there. 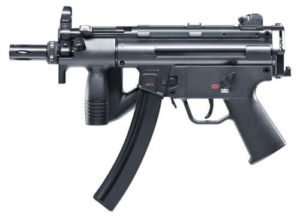 For the best mp5 for airsoft that you can find in the market today, the Umarex Heckler & Koch MP5 is one recommendation that I can give.

This Umarex version of Heckler & Koch MP5 costs less than $100 (click here for the price). This is a CO2 powered gun and you can use a .12g CO2 pellet to start shooting. This airsoft rifle features a drop free magazine and works as an action semi auto repeater rifle.

This airsoft rifle comes with a safety type manual and a foldable stock. This is a .177 caliber airgun and it can do 400 feet per second. The Umarex Heckler & Koch MP5 airsoft rifle is a semi-automatic.

Finding the best airsoft MP5 for your next close counter battle is now easier with the awesome picks we have for you.

If you want to find out more about airsoft MP5 or other versions of this gun, you can continue to read some of the best airsoft mp5 reviews that you can find online as well. Happy shopping!