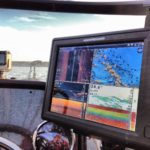 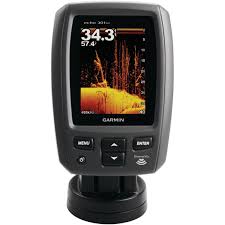 When going out to fish, a fish finder is an important gadget which should never be left behind.

At times it is hard to find the fish by merely looking at the waters.

Let technology do the search for you while you just enjoy yourself in the boat.

Buying a fish finder doesn’t have to be an expensive venture.

There are several quality fish finders which costs less than 300 in the market.

Click here for the Best Fish Finders Under 300 available in 2021!

Some of the ones which cost for under 300 include 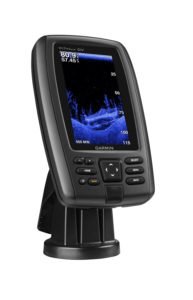 It has a diagonal screen measuring 4.3 inches. It provides a photographic view of what is happening under the boat by use of the DownVu technology.

It has the traditional sounder capabilities found in the old echo series; has a dual beam of 77/200 kHz transducer and transmit power is at 500W RMS.

It goes up to 2300 feet deep. Mounting the device is easy as it has a quick release tilt / swivel mount, a transom mount, and low profile trolling motor mounting kits.

It has a smooth scaling graphic which produces uninterrupted imagery which switch between depth range scale.

It is very powerful and simple to use coming up with clear color images that make it easy to see what is beneath the boat.

This is one of the best fish finder under 300  due to its simplicity.

Check out this video of the Garmin EchoMap found on YouTube: 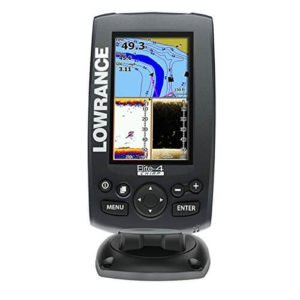 This is a worth investment for a fish finder. It is one of the best fish finder under 300 in the market.  It has an amazing feature and with the DownScan and traditional sonar, you have a great device for fish finding. The DownScan is mainly used to find structure while the traditional sonar is used to spot individual fish. With the Elite 4 HDI from Lowrance, you will be able to see one screen which will show both bottom and structure with DownScan images. All those things which are under the waters; the rocks, the submerged objects and the fish, all will be seen on this wonderful device.  On the traditional sonar, you will be able to see suspended arches which will most likely bethe fish.

It combines technology of two award winning technologies into one giving it the characteristic of the best fish finder under 300 in the market.  It exclusively separates and clearly exposes fish targets from other surrounding structures like rocks and other underwater objects. All this is displayed on its 4.3 inch color screen with a high resolution of 272 H x 480 V pixels, thus providing a visibility that is clear in all conditions. 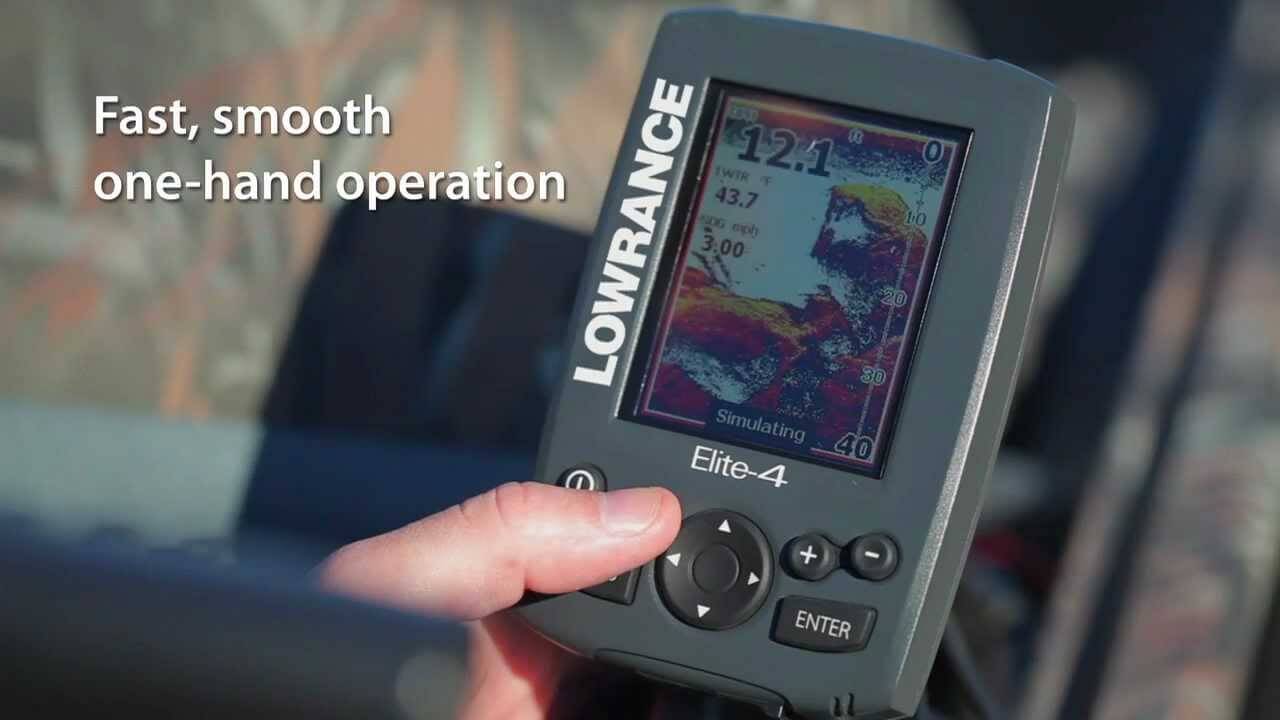 It has a highly built in GPS with a detailed US background map with a MicroSD slot in case you need to do map upgrades. For the histories in the sonar, it can be accessed using the trackback technology of  this wonderful device.

It comes equipped with a wonderful split screen multi window display, advanced signal processing and a new easy use menu system which will make it easier for the angler to operate it.

Check out this video of the Lowrance Elite 4 found on YouTube: 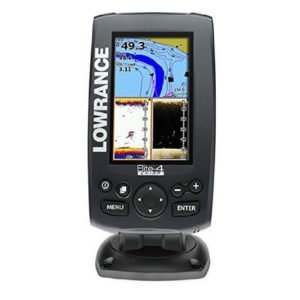 It has a 4.3 inch color screen which it utilizes effectively, thus making it to be one of the best fish finder under 300.

It has an LED backlit, which supports a high resolution color display, making it vibrant and easy to read. It has the ability to produce a multi window display and allows users to customize their layouts.

It comes with the hybrid broadband / DownScan transducer, capable of reaching the depth of 750 feet in the traditional sonar mode.

The device is easy to use due to its advanced signal processing feature that automatically adjusts sonar settings to optimal configuration.

It supports the DownScan Overlay technology,  which overlays photo like DownScan images onto broadband sounder output.

The above combination makes for a more accurate and complete underwater image, allowing the angler to point out individual fish.

There is a trackback which lets the users to backtrack for various objects on a graphical sonar timeline without having to turn the boat completely around. 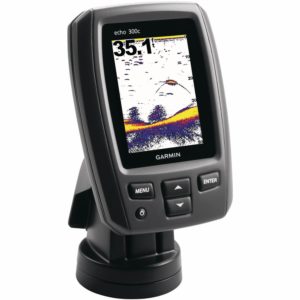 This is one of the best fish finders under 300 as it can detect any fish that might be in its sonar’s area thus making life easier. Its display will give you the ability to adjust the backlight and also offer an option of switching between day and night modes. It has a high resolution of up to 3.5 inches and a high color display.

It has an auto gain setting for the purposes of automatically adjusting sonar sensitivity. Its see through technology helps show simultaneously the strong and weak returns. It has a white line which helps to show the thickness of the bottom and an indicator of the battery voltage which will help the angler to notice the voltage level of the battery so as to avoid sudden blackening out of the machine.

It has a color scheme which is used to determine the color to be on the screen background.

There s an option of selecting blue or white. Its scroll speed is used to help with adjusting the sonar’s scrolling rate from left to right.

The surface noise enables the angler to hide the sonar returns to reduce visual clutter. A keel offset is attached to it to help in measuring the depth from the boat keel’s bottom instead of reading it from the transducer. 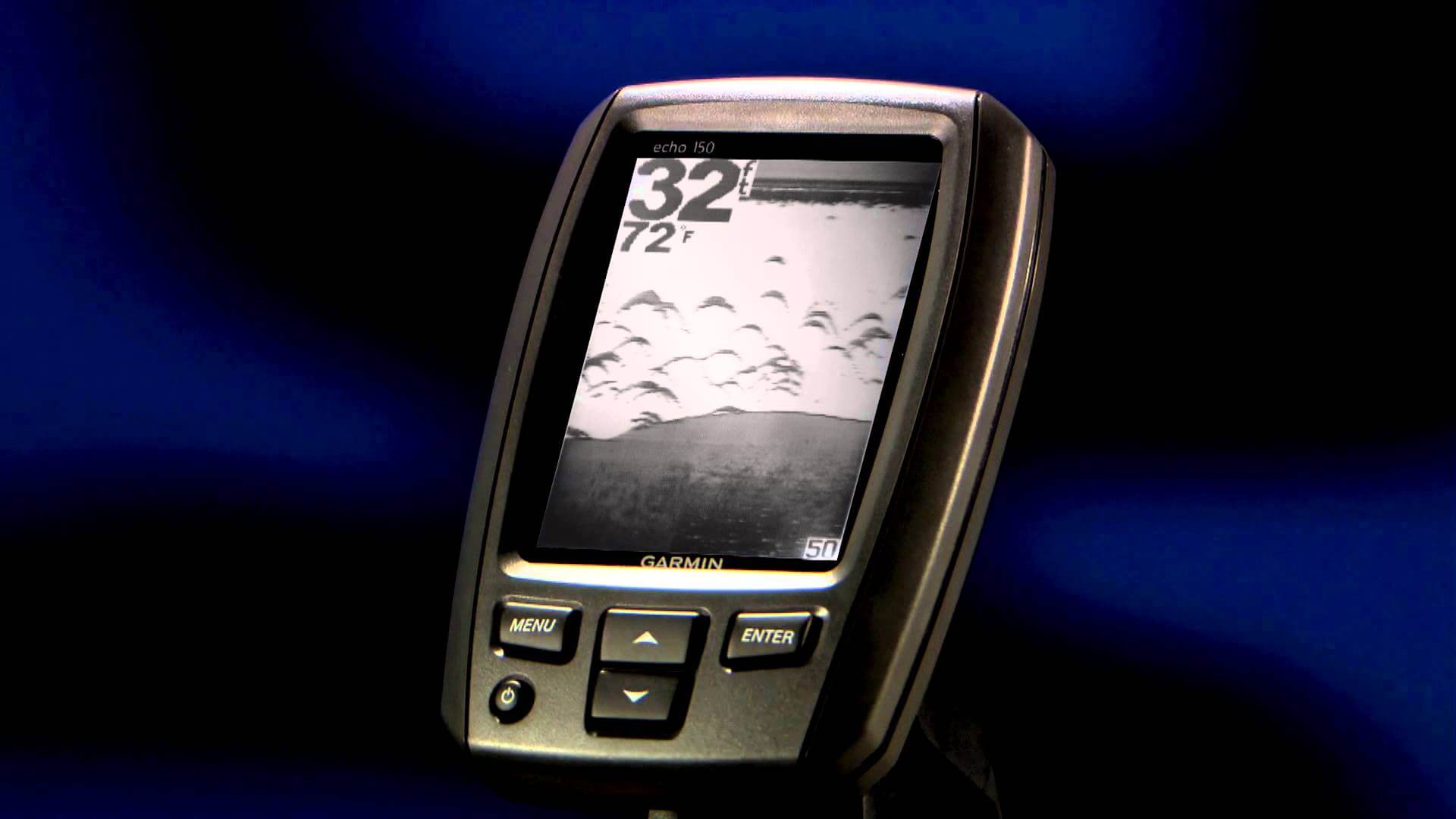 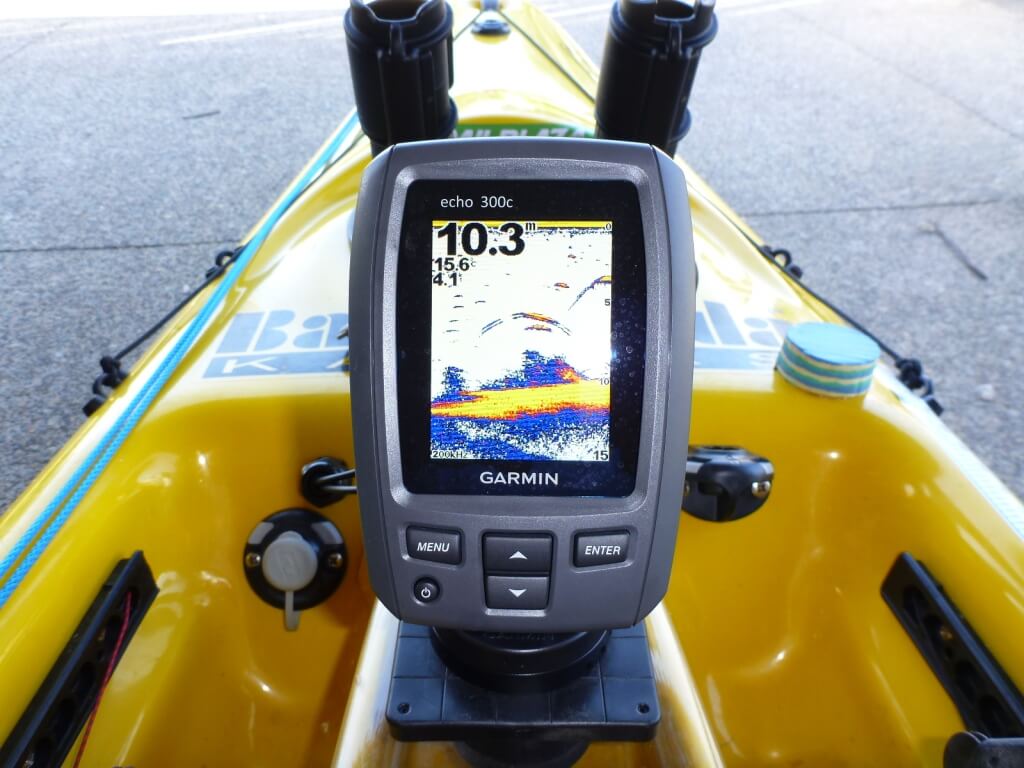 This is a nice product and one of the best fish finder under 300. It is waterproof, has a 3.5 inch display, has a dual beam transducer, and it looks cool from the outside.

Check out this review of the Garmin 300c found on YouTube: 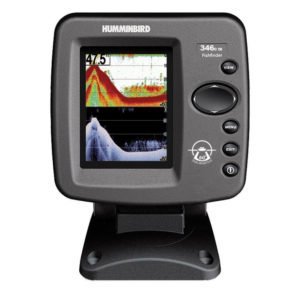 This is a wonderful fish finder which is good for fishing in fresh water. It is one of the best fish finder under 300 available on the market.  It focuses solely on the fish finding solutions and has no navigational features that would considerably increase its price.

It comes with a small head unit and it has a 3.5 inch screen which has a full color display and backlit display too. It is equipped with dual beam plus sonar to make it one of the best fish finder under 300 and a Switch Fire which allows it to be operated on two frequencies either simultaneously or separately. It operates at  200 kHz / 28 degrees and 455 kHz / 16 degrees and has a depth capability of up to 600 feet.

Its down imaging sonar adds to the beauty of this device of having two operability modes: 455 kHz / 75 degrees and 800 kHz / 45 degrees  and at a depth capability of up to 350 feet. 500 watts RMS / 4000 Watts PTP is its power output.  It operates on a transom XNT 9 DI T standard transducer which comes equipped with a quick disconnected mounting kit.

To add on the above, this device has a Fish ID+ temperature alarm, and a mark structure on sonar which can be useful for marking fishing spots, though it doesn’t have a chart plotting and track plotting, the mark structure comes in handy to do the plotting. 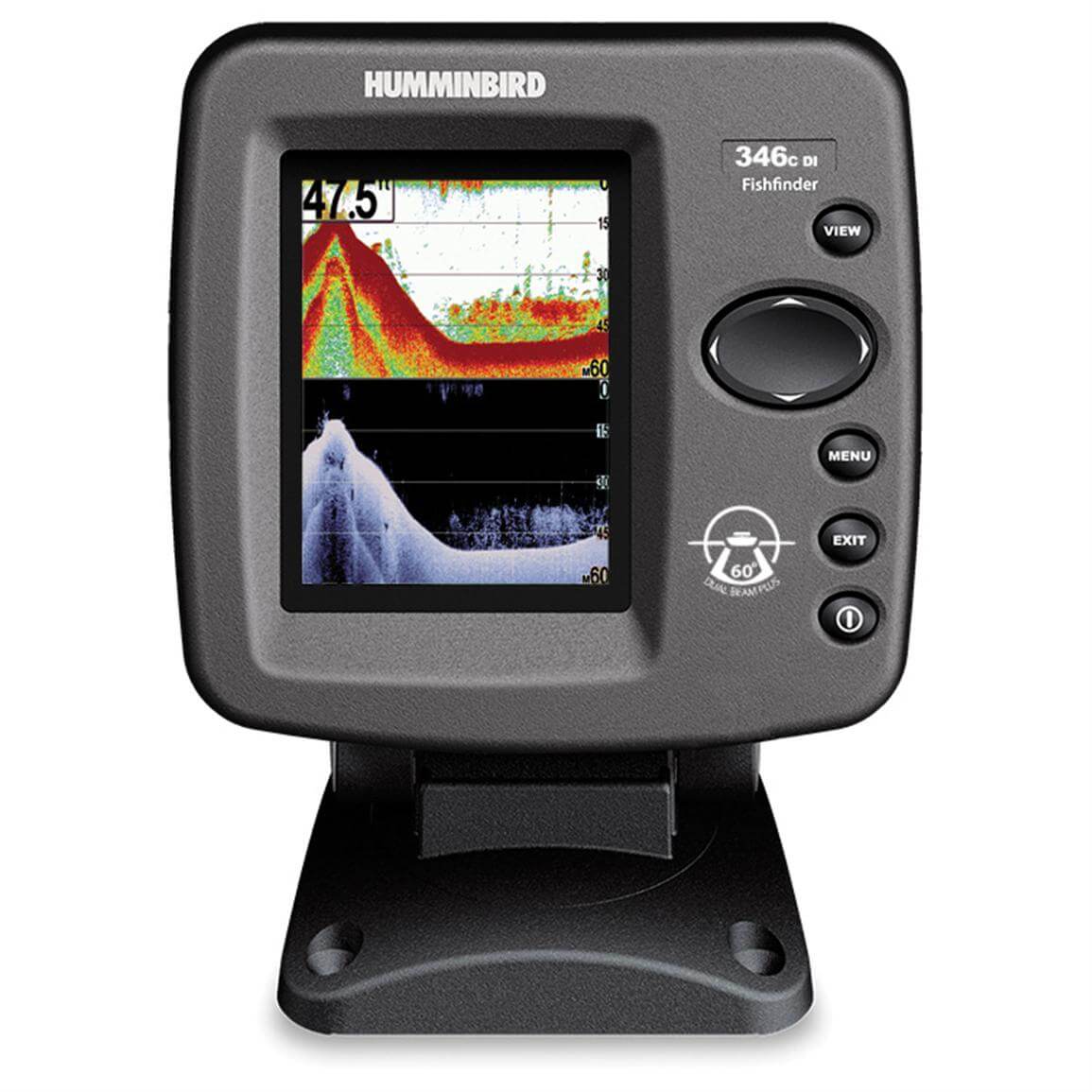 It is a user friendly fish finder which will enable the user to make custom view selections or change the view to larger digits. It is a practical, beautifully designed fish finder which is useful for all types of boating expeditions and fishing trips. This is one of the best fish finder under 300.

Before you make up your mind, there is some checklist you need to put into consideration when looking for the best fish finder under 300.

The unit that meets the above criteria is the one which you should definitely go for. And any unit that is in that group and has capabilities beyond any of the others  should be the preferred fish finder.

Have a different budget?

Check out our other articles:

What Makes a Fish Finder The Best?

Fish finders are sometimes referred to as sounders. A good definition of a fish finder is, it is a sonar device that utilizes sound waves and records the speed they move as they return. The waves are sent through a transducer ( a transducer is the part of the fish finder which is usually mounted on the ship hull). What happens to the data received? It is transmitted and displayed on the fish finder as lines and waves and shapes. Those which are advanced in nature will display in an array of different colors.  Several things which are under the water like logs, seaweeds, rocks and any other objects that are beneath the boat.  These devices, the fish finders are not only used to locate fish, but also used for safer navigation.

They became popular during the first world war and more advancement has been made on them.  Their prices depend on the manufacturers and other factors. The main fish finder manufacturers are Humminbird, Lowrance, Raymarine, and Garmins.

This is one of the best fish finder under 300 available in the market. It is easy to use as the menu is so simple and you can switch between screens using just one finger. There are no complications on the menu and this is great news for beginners. Go for a fish finder which is easy to operate. Get a device which is easy to operate without having to refer o the manual all the time. It will put more fun in the fishing and encourage concentration on fishing and not on the operation of the fish finder.