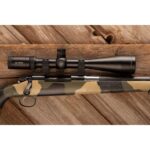 Optics is a big market, and it seems like these days there’s something for every weapon and price range which can make it difficult to make choice. A thousand dollars is high for some of them but when it comes to quality glass and optics this isn’t even close on some models.

For $1000 you should have certain expectations though, least of which is a bright picture and a clear view. Optics can be short, medium or long range and you’ll find scopes in all those under a grand and with good quality.

This is one of the top of the line optics aimed at shooters who want long range tactical ability. It has a magnification from 6 to the power of 24 and an objective 50mm lens, it’s good enough to feel like you’re reaching out and touching your target.

The lens is also multicoated which helps with sun flare, reflections and gives you a clearer and less hazy view even at the maximum level of magnification. It’s also coated with the unique HG Anti-Fog coating which prevents moisture haze and is water resistant. The scope is also argon purged which helps prevent the inner glass fogging over time. It’s all housed in a shock proof aluminum body that fits comfortably and well with most rifle profiles.

The clarity of glass in this scope is great and even at the highest power it won’t go dark. The adjustment knobs are smooth and it works well even in low light. There are two versions so be sure to get the one linked which has the first focal plane or the mil-dot only works at 12x if you get the second (though this might be your preference).  This is aimed at the tactical shooter with a 30mm main tube. There’s also a parralax knob and the raised turrets are easy to adjust. There are 10 different power settings for the reticule and the dial is solid enough that you don’t have to worry about it turning on accidentally. It’s fairly accurate and the turrets track true with the reticule and it’s pretty much water proof.

The elevation calibration isn’t the most accurate, and you may have to rezero it yourself. The turret screws will rust with moisture exposure quickly which isn’t a good sign of the quality but the rest is aluminum so it can’t rust. The casing doesn’t really stand up to rough treatment and if it’s dropped on a hard surface, like concrete, you may have to rezero the scope to get it accurate again.

This is a capable scope that delivers high range optics, perfect for long range shooting when at its maximum power. It’s got a 50mm lens that’s similar to the Bushnell which allows a good amount of light into the scope.

The illuminated reticule has several illuminated settings and you can turn this off without cycling through them. The turret is placed to the left of the rear lens which allows you to adjust without looking away.

This scope has plenty of options which equal it to ones way more expensive than $1000. During adjustment it clicks firmly and it’s nicely accurate too.

The glass offers impeccable clarity and with the illumination it’s still easy on the eyes, though to be expected it’s still poorer than something from NF or S&B. Vortex is rather a new company but this is well priced and comes with a good warranty.  The turrets have good feedback and are built solidly.

It doesn’t match standard Mildot equations because it’s second plane and the magnification ring is really stiff to adjust so it’s frustrating (and if you want it easier the company expects you to pay $60 for an add on lever).  There’s nothing wrong with second plane but at this price range you should be holding out for first.

While you’ve probably heard of the Acog, the Accupoint is a better close range optic from the same company. This is versatile enough with a power of 1-4 and in close range it can be as accurate as a red dot sight.

This gives precision and accuracy when in close quarters. It’s battery free which is convenient, instead it uses a Tritium phosphor lamp. It’s made from extremely light aircraft aluminum and has a fog proof coating on the glass. It’s not the most recent scope but it is a good all-round option.

The zoom lever is nice and smooth and The reticule is the biggest strength of the scope as it remains constant even with increases in magnification which makes the aiming point more exact even at higher magnifications. The Trijicon fiber optics adjust the brightness of the aiming point automatically which is fast and convenient. There’s also a manual override for this. The real winner though has to be the fact that it’s battery free.

The brightness isn’t as accurate or as easy to adjust since you’re using a cover over the gold or red absorption point it can be finicky.  Swapping from a dark area to a light one is also an issue as the reticule goes black and while you won’t have trouble seeing it it’s also not a great time to have to adjust. At 4x magnification the red triangle becomes 4.2 MOA and this blocks the target which is frustrating though you can use the elevation knob and sight under to get around it.

While the Accupoint might be a good close range scope it’s an issue for all round flexibility and the issue with going between light strengths is a severe disadvantage. For the best rifle scope under 1000 it has to be the Bushnell, the Vortex simply has a few too many flaws during use to be reliable. While these are all good scopes if you’re willing to spend a little more you might actually find you’ll get a significant difference since good optics don’t run cheap.