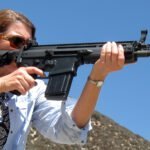 There’s no denying that the semi-auto civilian version of the SCAR-H is a good gun. It has a short stroke recoil system which means cleaner operation and less carbon emission than the AR-15 and it feels much lighter. Aimed at the special operations marksman the powerful .308 chambering is ergonomic like an assault rifle and with a good optic you can get maximum range from this.

With great power also comes great recoil and any optics are going to need to be recoil resistant or they’ll lose their calibration. On top of this the optics need to be as versatile as the gun transitioning between a close quarters weapon to a designated marksman rifle.

Probably the best Scar 17 scope out there the ACOG is popular with the military but on a .308 the bullet drop compensation is null without the ballistic reticule (o be sure to get that model if you choose this). It’s designed specifically for the .308 and has a battery free reticule that is illuminated with tritium and fiber optics.

It does weigh a bit though and it’s 9” long. Trijicon makes good quality optics and this is definitely one of them. These have been around for  30 years now and these are the favorite for many when choosing a combat scope. They’re not that expensive over all, the cost simply relates to how much the optics themselves cost to produce.

So durable it’s practically bulletproof these are meant to stand up to the toughest combat environments, It has a red or green reticule (green is more expensive marginally) option and the glass is super clear. The tritium lasts about 14 years before needing replacement. The

The fiber optics can get a bit bright when in full sun, making them difficult to see and cause a bit of a glow halo and the tritium could be brighter since it’s not great in low light. The eye relief is only about 2” which means your face has to be pretty close.

This is a capable scope that delivers high range optics, perfect for long range shooting when at its maximum power. It’s got a 50mm lens that’s similar to the Bushnell which allows a good amount of light into the scope. The TMCQ MOA illuminated reticule has several illuminated settings and you can turn this off without cycling through them. The turret is placed to the left of the rear lens which allows you to adjust without looking away.

This scope has plenty of options which equal it to ones way more expensive than $1000. During adjustment it clicks firmly and it’s nicely accurate too. The glass offers impeccable clarity and with the illumination it’s still easy on the eyes, though to be expected it’s still poorer than something from NF or S&B. Vortex is rather a new company but this is well priced and comes with a good warranty.  The turrets have good feedback and are built solidly. There’s also the stop built in so you don’t lose your zero by going more than one rotation under.

The illumination isn’t adjustable enough to actually make a difference when it comes to daylight and it can be hard to see in bright sun. The illumination also has to be on for the scope to work, something that is a little misleading and makes this scope far more useful in the dark. The waterproofing is also no nearly as good as advertised and it can take a long time before condensation and fog clears

At about half the price of the Trijicon you might be wondering what you’re losing. Nikon makes good glass and this comes with a fully coated set of lenses to give a super clear image and accuracy over long ranges. The lens is considered to be a little over-sized but this helps with giving better magnification on heavier caliber firearms.

At 14” it’s living up to being over-sized but doesn’t affect performance. It has a BCD reticule that’s already set for .308. Nikon also has a SpotON tool on their website so you can calibrate your scope exactly to match your factory ammo for pinpoint accuracy.

The eyepiece focuses quickly as advertised which helps for instant acquisition. Despite being long it has a slim profile and is very accurate. The scope is well made and the SpotOn app is very convenient and works perfectly. The price is also a great reason to choose this scope as it’s so cheap in comparison for most others designed for .308.

The tube is a bit small at only 25mm and this makes it noticeably dimmer than the Vortex. The turrets are little flimsy and while the glass and construction is shockproof the turrets are not and will quickly stop working at the slightest bump, since they are uncapped this means you’re going to need to baby it which isn’t ideal.

If you can afford it the Trijicon really is no contest. You’re talking an entirely different level of scope designed for precision engagement that is favored by the military. It’s designed to perform. If you’re no quite willing or able to shell out that sort of money then it’s got to be the Nikon. The Vortex is great but only if you want it for night shooting. Nikon produces quality glass and despite the turret issue it performs perfectly for something that is so cheap. There’s really not a lot separating these three scopes to determine which is the best scope for scar 17 other than price and how fancy you need your scope to get.