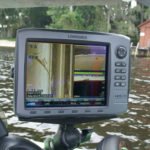 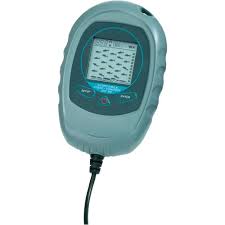 Sonar is an acronym for sound navigation and ranging.

The best sonar fish finder makes great use of the echo.

When a machine or an animal makes noise, sound waves are formed in the surrounding environment which bounce back off to the nearby object and some are reflected back to the object that made the noise.

The range of low frequency sonar is remarkable and this is what makes sea animals to be able to tell the difference between objects from very far.

Click here for the Best Sonar Fish Finder available in 2021!

Some of the best sonar fish finders in the market include: 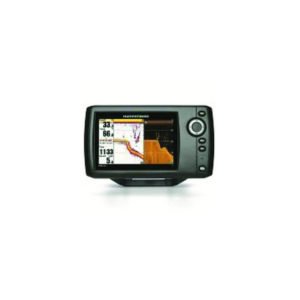 This is one of the highest rated sonar fish finder produced by the Humminbird manufacturers.  It measures 7.55w by 6.64h x 3.3d. It also comes with a power cable, a swivel transom mount,a transducer, and an instructional manual with DVD.  It has a 5 inch wide screen on the front for display purposes displayed in crisp, clear images in 256 colors with a resolution of 480 x 800 pixels. The control buttons are user friendly and you only need to press the on and off, the access menu functions. You can as well enable the image zoom, mark waypoints, choose single or split screen, make sonar selections and navigate whichever way you want to.

The down imaging sonar using the high frequency sound waves provides a picture of what is happening beneath the water’s surface up to 350 feet deep. With it, you can be able to see bait balls, vegetation, and game fish. An illustration of the depth at which these features are found is also demonstrated on the sonar.

It has a dual beam plus function which provides traditional sonar images up to 600 feet. The images are picked by the beam at 28 degrees angle at a frequency of 200 kHz and at a 16  degree angle on 455 kHz frequency. A narrow beam can be picked for greater accuracy but a wider beam is good for scanning larger areas.

Once the fish finder is on the water, the unit is powered on, LCD backlighting is adjusted o ensure visible images regardless of the conditions of the current lighting. Large digits provides water depths and temperature along with vessel speed. The device  comes loaded with a UniMap cartography which provides detailed, full colored 3D charts of thousands of rivers and lakes in the United States. This fish finder can store up to 2500 waypoints of 45 designated routes. You can insert the MicroSD in order to capture and enhance current software storage.

This is one of the best sonar fish finder due to the preloaded features that it has. Reading from the side imaging fish finder reviews, most people prefer this type of fish finder. It will definitely provide the anglers with an advantage whether on fresh or salt water. 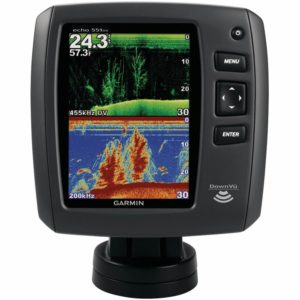 This great fish finder from Garmin comes loaded with all the wonderful feature every angler is looking for and that is why it is one of the best sonar fish finders in the market. It has an all in one transducer which provides both conventional broadband sonar and down imaging.  In its price range, it provides some of the quality images on its display. This images can be viewed both vertically and horizontally.

The Sonar of the Garmin Echo 551 DV Worldwide With Transducer

The transducer has the capabilities of both conventional and DownVu dual beam sonar. It has a high power output of 500 watts transducer which allows the sonar to reach 2300 feet deep thus making this device a perfect gadget for deep fishing.

Display of the Garmin Echo 551 DV Worldwide With Transducer

It has a 5 inch display of the Garmin Echo 551 DV fish finder is another feature that makes this device to be regarded as one of the best sonar fish finder.  It has a 480 by 640 pixels and a VGA color display, which provides bright and clear images. On this platform, you are sure of seeing bright and clear images, thus enabling you to differentiate details of underwater. You will be able to differentiate between fish arches,structure and the bottom of the waters.

Extra Features of The Garmin Echo 551 DV Worldwide With Transducer

How Does Sonar Fish Finder Work

The principle of the sonar involves bouncing waves off objects and determining their distance by measuring how long it took the echo to return. It is best used on boats and ships to measure the depths of the waters in the lakes, sea and oceans. It is at times also used to locate the underwater objects such as submarines, shipwrecks and fish.

A quality sonar can give a machine vision for mapping  and navigation purpose a run for its money. A sonar which is high level  can differentiate between among objects in its vicinity. Its capability to distinguish between individual objects, is what is called resolution.  Get a high resolution from the sonar by engaging a narrow wave beam.

According to the side imaging fish finder reviews on this fish finder, it is just one of the best sonar fish finder in the market. This is because, it has a powerful sonar, an advanced HD-ID and DownVu transducer, photo like images of sonar reading  it displays, it has a zoom option, has extra features that will make it easier for the anglers to target fish, has high depth capabilities, has a solar history rewind, and can work in a split screen mode – horizontally or vertically.