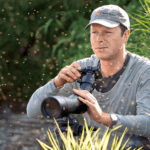 Digiscoping is taking photos using a camera and a spotting scope. The spotting scope increasing the magnification which enables one to take photos of features such as animals that are very far away. It is common to use angular scopes as they allow one to maintain a natural position while taking these photos. However, a straight spotting scope has its advantages as well. The main one is that it allows for speedy identification of the target. It, however, poses a challenge when one wants to take photos of, for example, birds in the air. Spotting scopes for digiscoping are used with tripods.

There are a number of other factors that one has to consider when choosing a spotting scope for digiscoping. The size of the objective lens, the magnification power and range, the weight of the scope and the price are some of the factors to consider. These features determine the image that one will have at the end of the day.

Some of the best spotting scopes for digiscoping include:

This Leica spotting scope is good for digiscoping because it can be used in different light conditions to produce clear images. It has an apochromatic color correction, which enables one to take sharp images that are rich in color.

The Leica APO-Televid spotting scope is light in weight making it easy to carry around as one takes their photos. One should choose a lighter scope as hauling it around becomes easier. The sturdy body which is partially armored by rubber makes the scope secure from accidents such as falls on different surfaces. It is also impervious to precipitation as it is waterproof.

The Leica APO-Televid Straight Spotting Scope offers straight and not angular vision. It can be paired up with eyepieces from the same manufacturer. This spotting scope also has a 32x wide-angle which gives a view of forty yards at 1000 yards.

This spotting scope provides a straight view. With a 65 mm objective lens, it provides for sharp images even in low light conditions. Additionally, it has a magnification power of 18-45x which allows the user to be flexible in the field.

The spotting scope is easy to haul around as it weighs about 4.2 pounds. Having a light spotting scope eliminates the chances that one would end up leaving it at home or in the car because carrying it around is tedious.

The Carl Zeiss Optical Dialyt Spotting Scope enjoys a limited lifetime transferable warranty. This allows the owners to get repairs for free for the lifetime of the spotting scope. It helps to save on money, which is a great thing because of the pricy tag that comes with the purchase of this spotting scope.

This provides for images in high resolution and rich in color. The spotting scope also reduces chromatic aberration through the triple apochromatic lens. With a straight body, finding targets is easier, thus making it suitable for digiscoping. It is relatively heavier, at 7.8 pounds, than other spotting scopes and is therefore more compatible with car window mounts.

It has an eyepiece zoom of 20-60x and comes with a carrying case. It is waterproof and dust-proof thanks to argon purging. It is also internally fog-proof in addition to having an outer body that secures the scope from damage during incidences such as falls.

Once you have paid a pretty penny for a spotting scope you want to be sure that it will not easily be damaged as these scopes are used in some rugged terrain and outdoor areas making them very prone to damage.

This spotting scope is relatively cheaper compared to the price tags on other spotting scopes. It is lightweight and easy to lug around while digiscoping.

The scope is used alongside a tripod. It has a 60 mm objective lens that gives high quality images alongside the 12-36x power zoom. It has fully coated optics and an 18-14mm eye relief. The Celestron Landscout boasts of a minimum 33 feet focus distance and a field of view at 157 to 84 feet at 1000 yards which is quite impressive.

Similar to other spotting scopes, the Celestron Landscout has rubbered housing which beefs up the security by protecting the scope from damage.  It also has a sunshade to prevent physical damage to the lens due to different elements such as rain and dust.

The Hawke Optics Endurance ED spotting scope is best used in the outdoors. It has an 85 mm objective lens which is large and which produces clear images.

It also features fully multicoated lenses with antiglare feature. Like other spotting scopes, the Hawke Endurance scope is also waterproof as well as fog-proof. These features allow the scope to be used in different weather conditions without the fear that there will be damage either to the scope as a whole or to the lens. It also has a strong outer body for extra security for the scope.

At 1000 yards, the Hawke Endurance ED Spotting Scope has a 105-52.5 foot field of view. In addition to these features, the spotting scope is quite light, at about one and a half kilograms which is relatively easy to carry around.

Different forums offer platforms for people to get advice about which spotting scopes to use with specific budgets, the advantages and the disadvantages of different scopes.