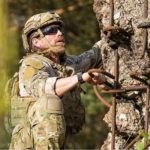 So want to upgrade your watch? Technology has come a long way from a simply set of hands and now some of the best outdoorsman watches offer everything from GPS to being able to lead you home in pitch black. There’s a lot of impressive technology out there and it’s updated daily. Thanks to smartwatch technology watches can be far more useful and you’ll be able to track distances, ABC, GPS, and more, often with a handy app to connect to and analyze your data.

What you want is something that’s athletic, light, and that appeals aesthetically but it’s also got to be practical and functional to fit an active lifestyle.

Reviews of the Best Watch for Outdoorsman

Originally designed for military use this is a much tougher watch than the Fenix, so if your outdoors activities are more rugged than sporting this is a great choice. It’s also scratch resistant and allows you to insert waypoints into your navigation and a track back feature to lead you back if you get lost. There’s a trend graph feature with the barometer which also allows you to predict the weather. It has all the smartphone features and a decent app. It also has quite a few “sports” modes where you can pick your sport and log accordingly based on preset hand movements.

This is a rugged upgrade from the Fenix since it’s got a lot more usable features and better navigating options. This is great for wilderness adventure since there’s so many navigation bonuses without added fluff like “swim modes” that the Fenix offers. It’s simple, small enough to be comfortable for long periods, and durable. It also provides extra data like pace and calories if you really want them plus the housing is shockproof. There’s a lot of added military features you won’t need to worry about such as airborne mode and one for night vision goggles too. Possible the coolest though is being able to control VIRB action cameras using the watch.

Sadly the Tactix is not as durable as you would think and it’s especially susceptible to dust getting into the crevices and jamming up the buttons. There’s also a little too much customization and it’s easy to make a mess of your menus to the point where you’re totally lost since you can only customize them in the watch itself and that can be frustrating. The GPS is also slow to connect since it’s not GLONASS compatible and not as accurate as Garmin’s handheld systems.

With a stunning brushed steel look this has plenty of features to go with the sleek urban look. This is perfect for the outdoorsman who might want to pair functionality and style. The Suunto has a lot of features and is ideal for outdoors activities since it also has a sturdy construction. While this doesn’t have the reinforced glass there are screen protectors available. It’s one of the most accurate pieces out there and the menus are also really easy to use. There are 4 versions available all with similar features but different colors.

With three alarm options and an impressively accurate altimeter this is a very functional watch. The display is clear and  logs information for skiing, hiking, climbing and other sports that include altitude measurements. There’s an alarm function as well as as stop watch and time setting. There

The display is poor in bright light and hard to see, especially if you have polarized glasses on and there’s no negative option to fix that issue. Thermometer also only works when it’s not on your wrist which is rather annoying.

The Fenix is a nice rugged design and it looks like a sophisticated watch rather than just wearable tech. The updated Fenix 2 has a lot more features than the original such as ski mode, swim mode, and fitness training. Garmin is known for their impressive GPS technology and this is one of the best on the market since it’s both rugged and reliable. There’s two models and two bundle options but the differences between them are minimal when it comes to the device itself since they till operate with the same app.

The huge selection of modes is a major bonus and it has good battery life too since you can use UltraTrac to extend the life up to 50 hours. The different modes means that this is far more flexible than just a mountaineering watch and is ideal for training and regular fitness too. The interface is really easy to use and the menu is easy to navigate plus it can display up to three different settings simultaneously.

Without constant use the battery fails, if you’re not going to wear this often and charge it often it’s going to end up a paperweight. The accuracy of everything but the GPS is also a little questionable and there’s plenty of reports of buggy Bluetooth connectivity. It costs a lot to maintain this watch since the gaskets and battery replacement alone will add up to $80 or more a year.

The Fenix is a really good choice since it’s got loads of different sport modes to go with the basic ABC and GP features. While the Suunto really has the only look that can get away with being a designer watch rather than trail gear it just hasn’t got the features to compete. The Tactix is pretty awesome but it’s too much for casual needs unless you’re really determined that GPS is your priority (in which case you might want to look at the Tactix Bravo which also offers GLONASS compatibility for faster connection.