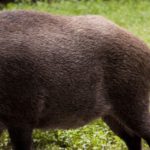 A few years ago, I was bow hunting feral pigs on a privately owned barrier island located just off of the coast of Georgia which is about two miles long and about a mile wide. FYI, I have been hunting on this island for several years now and thus, I am intimately familiar with the terrain and the various landmarks which is of vital importance to be able to navigate there because I was born in the Blue Ridge Mountains of western North Carolina and thus, I am used to having distinct terrain features to find my way by.

However, the island where I hunt is flat as a fritter and it consists of a band of open, Live Oak and Crepe Myrtle woods around the perimeter of the island which, in turn, surrounds a palmetto thicket from hell in the center of the island that we call “The Dungeon” because it is so thick that I have actually been in there in places where I could literally look straight down and not be able see my boots!

Therefore, it is very easy for a mountain man like me to become lost even on such a small island because the terrain is so flat that it provides very few landmarks to navigate by. However, when scouting the edge of the Dungeon one day, I ran across a pig trail that exited the Dungeon and so, out of curiosity, I decided to follow it into the interior. Thus, after a short hike through the palmettos, I came across a clearing which contains a shallow depression that, in yet years, forms a shallow pond and, after exploring the clearing, I discovered another trail that exited the clearing on the opposite side from the one where I had entered.

Therefore, since I was in the middle of prime pig habitat, I decided to hang around for a while and see what developed. Thus, after waiting about twenty minutes or so, I heard some racket in the palmettos to the south of my position and I could tell that whatever was making the noise was getting closer.

So, I knocked an arrow, got ready, and waited some more. But, as I waited while listening to the noise growing closer and closer, suddenly a whole sounder of baby piglets burst out of the wall of brush just a few yards to my right onto the trail that exited the clearing on the west side and, as soon as they reached the trail, they immediately turned east and headed right toward me! In fact, as they approached, they actually split into two groups and passed on either side of me as they ran into the clearing and one of them actually came so close to me that I could have kicked him like a football!!!

However, I decide to let them pass unmolested and stood watching as they all moved out to the center of the clearing and began to feed on acorns as they grunted and squealed at each other. Then, after watching this activity for about ten minutes or so, I suddenly heard the most God awful racket I have ever heard in my entire life in the palmettos to the south of where I was standing!

In fact, it was actually a little unsettling because I had never heard anything tearing up the woods like that before! Then, suddenly the sound stopped and, after a moment of silence, I heard a very deep and very loud “GRUNT!”. Next, I noticed that every one of the piglets that I had been observing feeding in the center of the clearing had all stopped feeding and were standing as still as statues while looking in the direction from which the grunt had originated.

Then, I heard more racket that sounded like Godzilla was tearing the entire woods to shreds and then, sudden silence again. Next, I heard the same deep, loud, “GRUNT!” again and this time, every one of those piglets turned and raced for the palmettos opposite of where the racket was coming from like they had been shot from a cannon! So, after seeing that, I got even more nervous because I have heard numerous stories of hunters being savaged by boars.

But, I was there to hunt pigs and thus, I decided to stand my ground; although, with somewhat weak knees and less than steady hands because I had already decided that if that hog did come out into the clearing, I WAS going to stick him! But, after waiting another ten minutes or so, I did not hear another sound and I never saw the boar. So, I then decided that since he was not inclined to come out, I was going in after him!

Therefore, I stealthily crept around the edge of the clearing to a point adjacent to where I had heard the racket and discovered another pig trail that led further into the palmettos. Thus, I followed it for a ways and soon ran across a Pin Oak tree that looked like it was eighteen to twenty-four inches in diameter that was missing at least a third of is bulk near its base from the pigs using it as a rubbing post which made me even more nervous because that was a big tree and I reasoned that only a truly big boar could have rubbed it that deep.

Thus, at this point, I started reconsidering my decision to pursue such a large hog in such thick brush with nothing but a bow and a Bowie Knife. So, after debating with myself for several minutes, I decided that the wisest course of action would be to back out of there and return the next day with my tree stand which is exactly what I did. However, despite my hunting in there for the next four days, I neither saw nor heard the boar I was after; although I did see several sows with piglets which led me to believe that I had found a nursery.

Since then, I have hunted that boar on several occasions but I have yet to see him. Thus, I am quite certain that my Hogzilla is still in there and, one day, we are going to have a little face to face chat at arrow point!