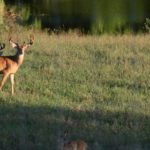 Any hunter that has ever hunted Whitetail Deer will tell you that they are very wary animals. Hunting them is a lot more challenging than most people would believe.

While there is a certain amount of luck involved, simply walking out into the woods, finding a place to set up your stand or ground blind, and then patiently waiting for a trophy buck to wander by is akin to the odds of winning the lottery in that while it might happen, it is not very likely.

Those hunters who successfully fill their tags each season do so based on knowledge of the terrain they intend to hunt, the species, and the habits of the deer population in their location.

However, acquiring such knowledge often requires numerous hours spent reading books and magazine articles in the off-season and numerous hours in the field observing deer in their natural habitat.

To shorten this somewhat lengthy learning curve, below, you will find ten tips to make your next deer hunt more successful.

As mentioned above, the first step in becoming a successful deer hunter is to gain an intimate knowledge of the terrain you intend to hunt. However, many hunters have very limited time to spend on the sport; thus, spending the necessary hours in the field exploring the terrain is simply impossible 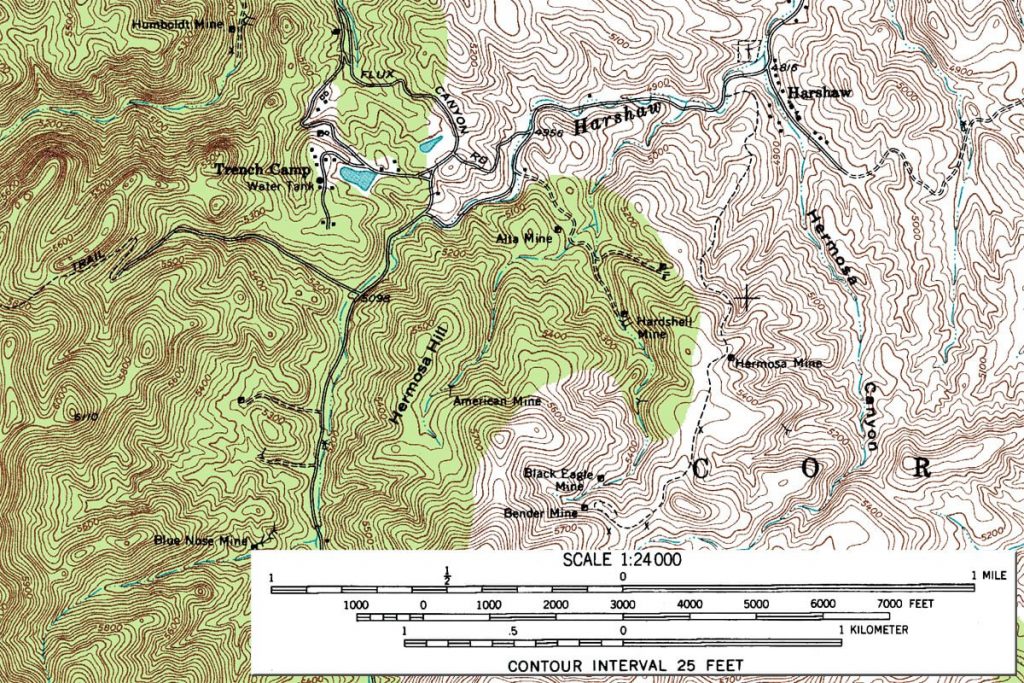 Without this knowledge, hunting deer is like putting on a blindfold, aiming at a target, and pulling the trigger in hopes of hitting the intended target.

A very useful tool from the United States Geological Service is their topographical maps. These maps show the lay of the land in extensive detail and notes such features as mountains, valleys, creeks, swamps, and other significant topographic features. By viewing one of these maps, a hunter can gain an excellent overview of the area they intend to hunt without ever having set foot on it.

In addition to USGS topographical maps, modern technology and access to the World Wide Web have provided hunters with the perfect tool to gain an even more detailed overview of the territory they intend to hun. 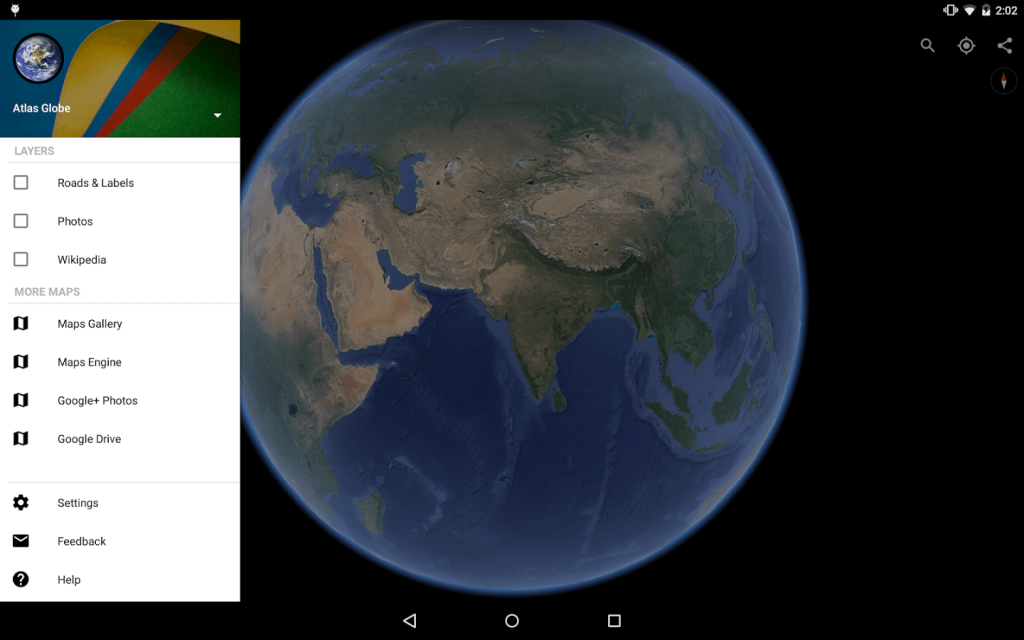 When viewing Google Earth, pay attention to these areas. Then note any terrain that enables deer to travel between potential bedding areas and food sources without exposing themselves to the casual observer.

Once you have gained a detailed overview of the area you intend to hunt using both USGS topographical maps and Google Earth, it’s time to get out and explore the terrain in person. It would be wise if you did your scouting well before the season’s opening. This will ensure that the disturbance you create moving through their territory will have time to fade from their minds. The scent you leave behind will have time to dissipate, so the deer will return to its habits well before the season’s opening.

When scouting an intended hunting location in person, you should start by locating any extra-dense foliage that may serve as a bedding area for deer. Because it’s nearly impossible for an animal to move through these areas undetected by deer, they feel secure when bedding down in these locations. Thus, they seek them out since they feel safe sleeping there.

Once you have located a patch that you believe might serve the purpose, rather than enter it, you should instead circumnavigate it while looking for any possible entrances and trails leading into the foliage and then make a note of their location since these are excellent locations to set up a tree stand or ground blind. 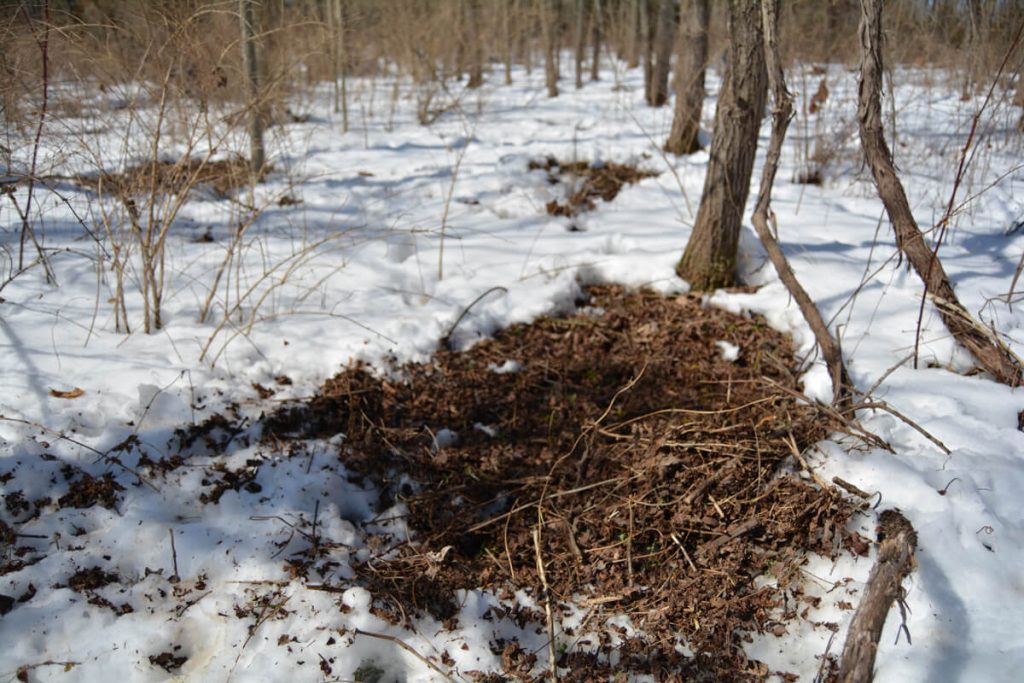 After locating what you believe to be an active bedding area, you should follow any trails away from the bedding areas to any possible food sources. These include agricultural fields, areas where timber has been harvested, wild fruit trees, etc. 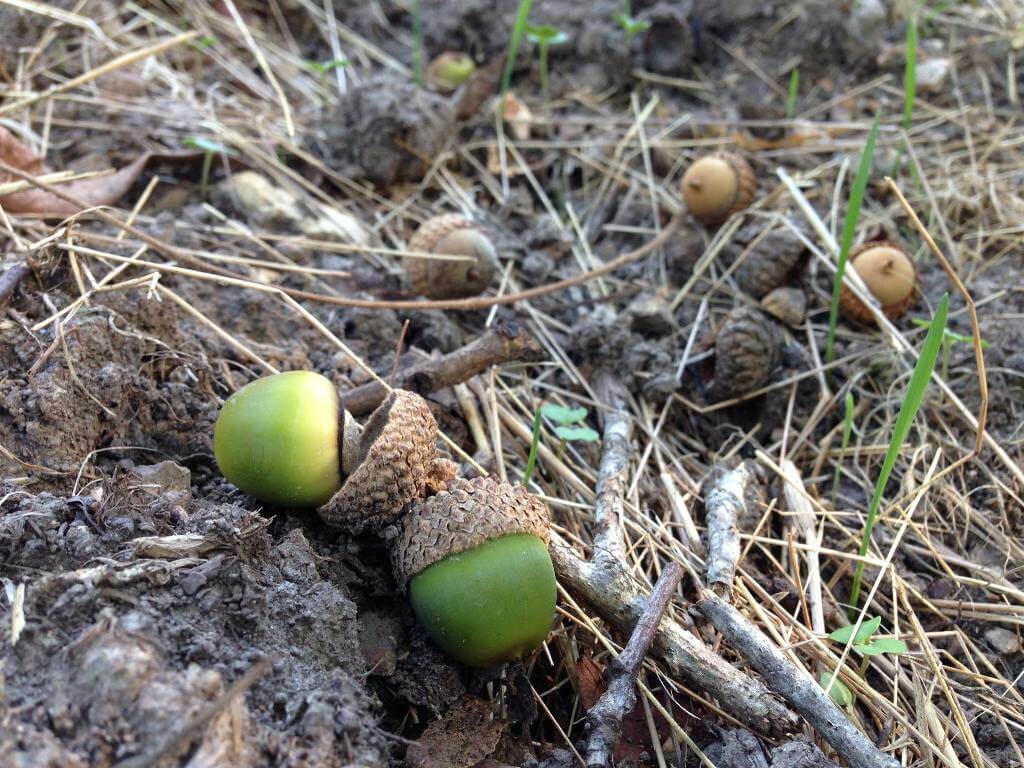 When you have located any favored food sources, you need to examine the ground and the foliage in that area for tracks and droppings. In addition, you need to examine any plants with stems or limbs that have been sheared off that might indicate deer’s presence and make a note of them.

You should also be aware that even if the deer are actively feeding in these areas, they are often not ideal places to put up a tree stand or ground blind unless the deer are feeding under a lone fruit tree since deer commonly have numerous different areas where they feed at different times. While they may visit any given food source on any given day, they may visit another instead. Therefore, instead of setting up at the food source, a better idea is to set up along a single trail leading to multiple food sources. This way, you can catch them coming and going.

While the list of available travel corridors is as varied as the terrain deer inhabit, such corridors often include narrow bands of dense trees or brush, fence lines, ditches, creek bottoms, and windbreaks. Key locations are anywhere two or more of these travel corridors meet. 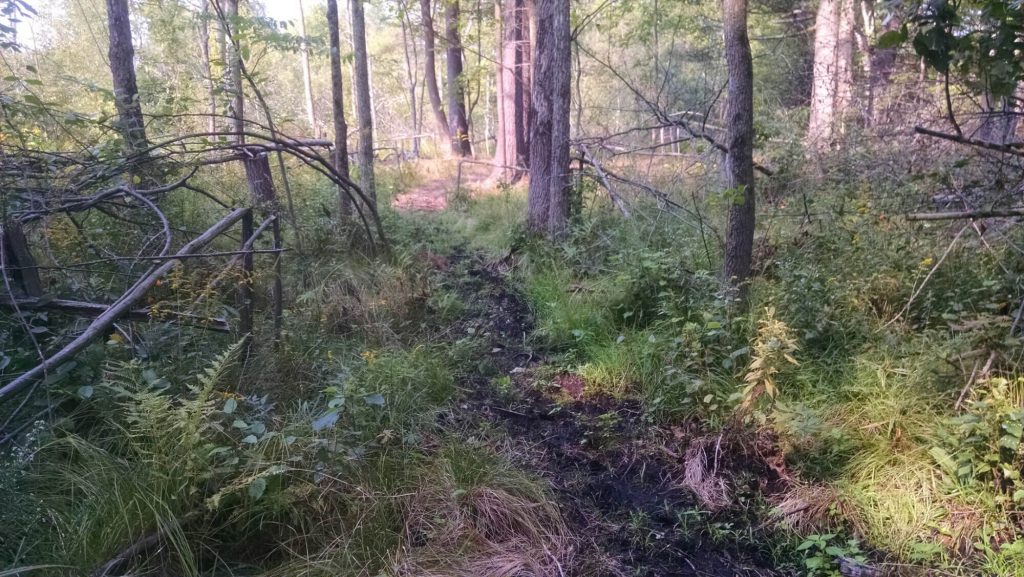 When scouting in mountainous terrain, you should know that mature bucks prefer traveling parallel to ridges about two-thirds of the way down from the crest. To maximize your chances of seeing deer in this terrain, you should look for locations where two or more ridges intersect. It would help if you also looked for a location where a series of ridges drop into a valley. Deer use these as reference points for their travels. 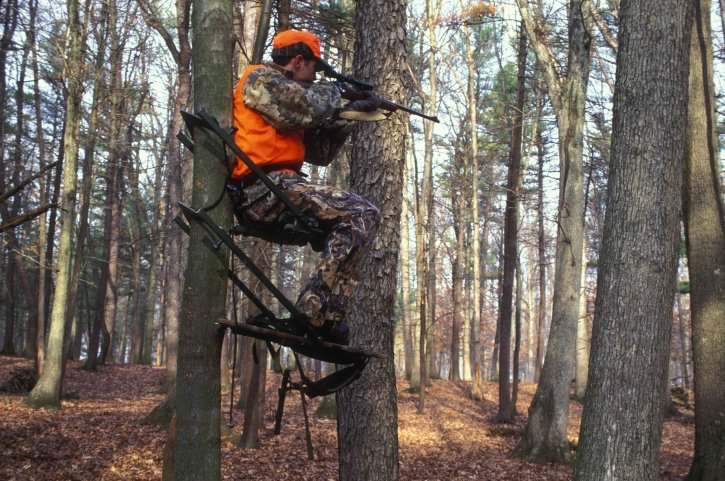 When deer choose to cross a ridge, they invariably do so at saddles (depressions in the ridge) because they enable the deer to move from one side of the ridge to the other without outlining themselves against the skyline. When hunting in the lowlands and coastal plains, you should consider placing your stand deep in extra-thick cover where you see deer trails entering or exiting the brush. Be aware that hunting in thick cover requires an all-day commitment because any time you climb up or down from your stand, the deer will hear you and either hold fast or slink away without your knowledge. Too much disturbance can cause them to abandon that area in favor of one with less disturbance.

Although deer physiology and mentality are essentially the same across the entire species, deer populations have different habits, especially mature bucks. Suppose you are very serious about harvesting a mature buck. In that case, you need to spend time in the field patterning individual animals.

Like pre-season scouting, this needs to be done well before the season’s opening so that your presence will have time to fade from the deer’s mind. A logical place to start is by locating last year’s rubs and scrapes. Bucks tend to claim the same territory year after year and follow the same routes when looking for a mate within their territory. 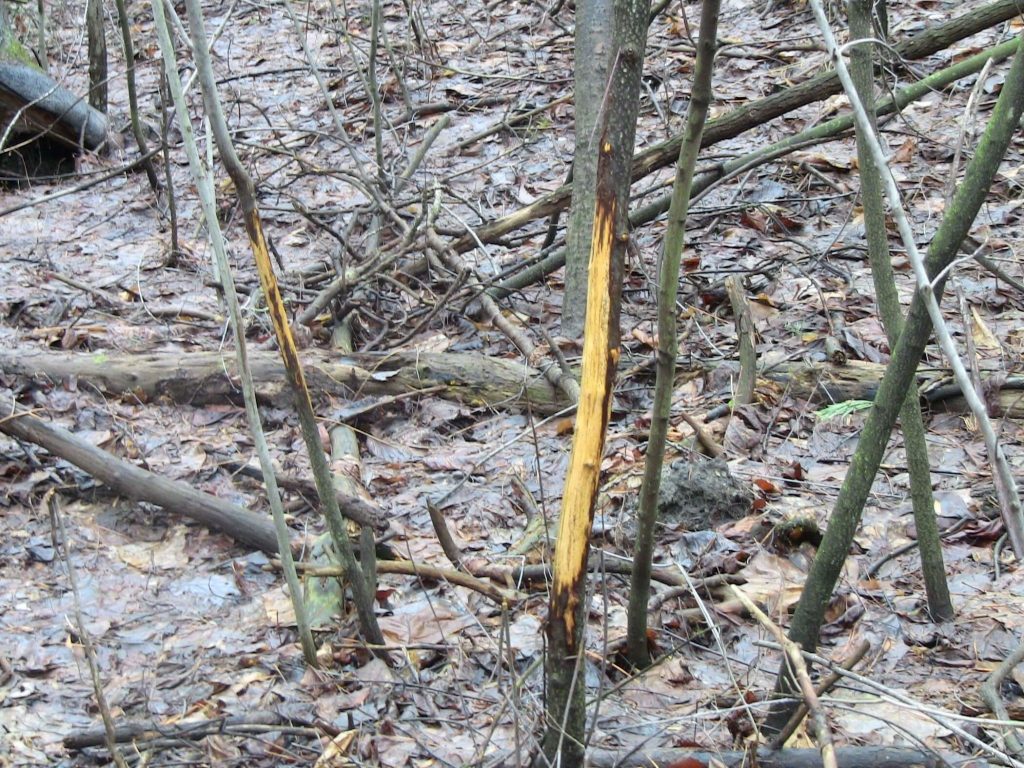 Once you have located an active bedding area, spend the day on the inside edges of these areas watching their entrance/exit trails. Note what times of day they rise and travel and what trails they use. For hunters who need more time to observe the deer in person, trail cameras are an excellent way to understand when they move and what trails they use. Once the deer is patterned in your location, place your tree stand or ground blind accordingly once the season opens. 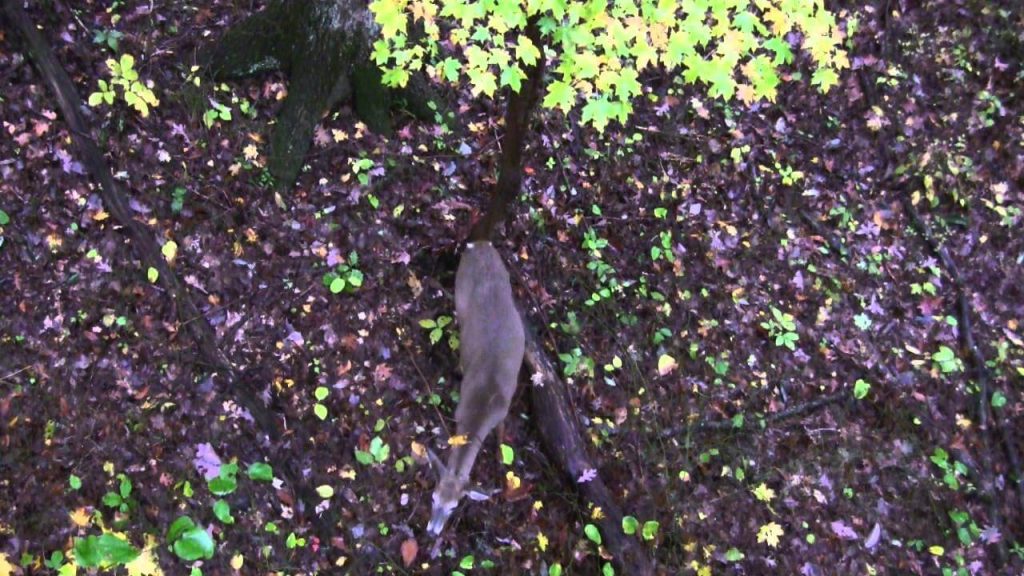 While most hunters are aware of doe-in-estrous scents, which work extremely well during the short period immediately before, and during the rut, they are not appropriate for use either early or late in the season. Dominate buck scents work well throughout the season since any dominant buck will want to investigate what he perceives to be an intruder to his territory and a challenger to his dominance of the does in that area.

To take further advantage of deer’s innate curiosity, you should combine doe-in-estrous scents or dominant buck scents with a deer call capable of creating multiple deer vocalizations since deer regularly communicate with each other to determine location and sex.

When a deer follows a scent trail or hears a deer call, they fully expect to see another deer when they arrive at the source of the scent or call. But, if they do not do so, it may trigger their instinct that something is not quite right in the situation. Therefore, they may fail to approach within shooting range. It would help if you also considered deploying a deer decoy with your attractant scents and calls. Doing so will give the deer something to focus on when they arrive at the scene and draw them closer for a clean shot.

While most hunters know the need to hunt downwind of the direction from which they expect the deer to approach, many hunters mistakenly believe that simply climbing into a tree stand placed well above the ground is enough to conceal their scent from the deer. 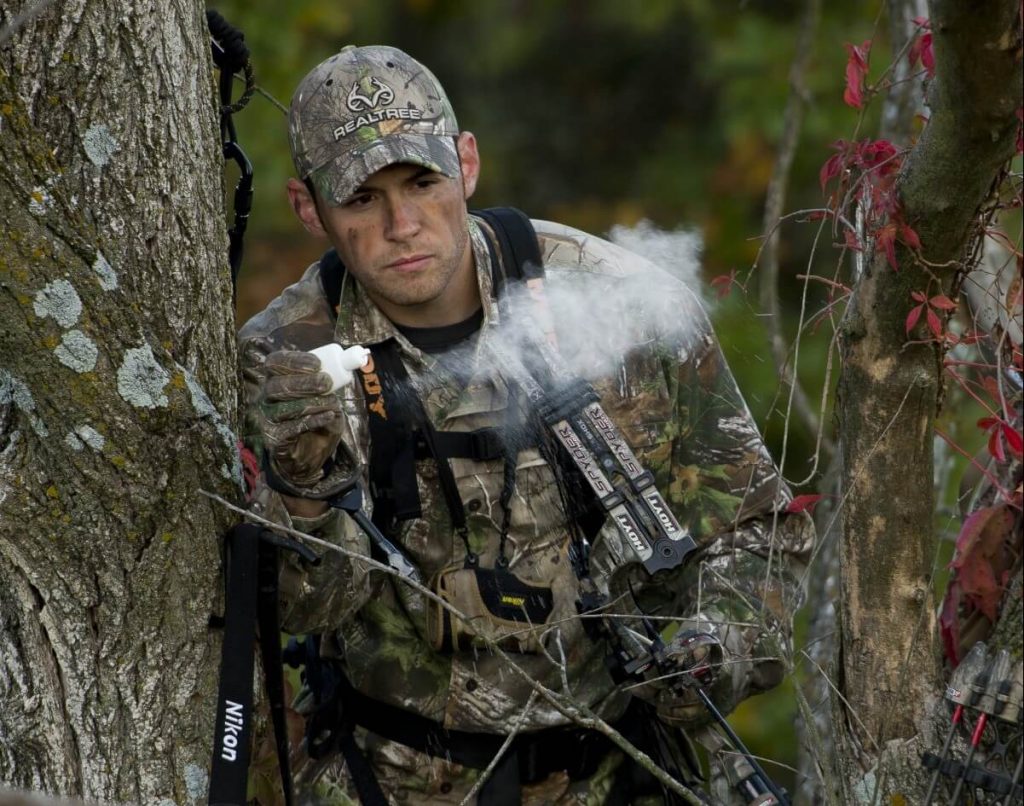 The fact is that moving air acts the same way as moving water in that it swirls and eddies around any obstructions. You must take steps to mask your human odor by using cover scents.

An even better approach is eliminating your human odor by using products such as a Scent-A-Way Max Odorless Scent Control Kit from Hunters Specialties in combination with specialized scent control camouflage clothing since doing so will make you virtually invisible to deer.

I'm an outdoors writer and gear reviewer. I love exploring new places, hunting big game, and spending time with family and friends in the woods. I'm always looking for new ways to improve my hunting and fishing abilities, and I hope you'll find our articles helpful. Here you'll find tips and information on everything from outdoor camping to hunting deer, elk, and moose and tips on how to get the most out of your outdoor adventures.