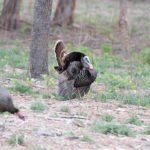 Although the term “Ten to two” is normally used as reference to a method for teaching proper fly fishing technique, the hours between 10 AM and 2 PM are quickly becoming the “go to” hunting time for taking difficult Toms. However, convincing hunters to hunt Wild Turkeys in the middle of the day can be a hard sell; especially to avid spring-time hunters. In fact, convincing an avid “long beard” chaser to sleep in during the magical moments of first light is nearly impossible but, that may be just the prescription needed to bag birds that absolutely refuse to cooperate off the roost.

In fact, to me, the excitement that I feel hearing the thundering gobble of a mature Tom Turkey is comparable to the bugle of a great, western, Elk. Therefore, I understand the sense of accomplishment you get when you have done your homework and find yourself at the base of the right tree just as daylight breaks. In fact, finding yourself within a short distance of roosting birds will definitely cause your heart rate to climb as the anticipation of the first gobble of the morning grows in your mind.

Thus, as “Old Mr. Long Beard” thunders his approval of your box call and his buddies up the ridge announce their second, your heart inevitably races, your mouth dries, and your ears strain for that first, faint, flap of wings as these large birds fly down from the surrounding trees to star their day. Then, suddenly, you catch a glimpse of a “fan” out of the corner of your eye and, as you slowly turn your head, your eyes confirm the presence of an old Tom as you watch him drum. Then, as he saunters into gun range, he fans his tail one last time, dragging his wings along the forest floor as he pirouettes and, boom! That one, lone, dominant, Tom struts his last strut!

Of course, that’s the way we would like for it to go every morning in the Turkey woods but, more often than not in the pursuit of Wild Turkeys, we sit in the right place and instead listen dejectedly as those spring-time love calls fade off into the distance and we know that a rafter of Hens is leading our big Tom farther and farther away. Yet, even so, we call and plead on every contraption we have until we have exhausted every option but, it’s all to no avail. However, maybe it’s not our calling abilities but rather, our timing that so often causes us to fail. Therefore, I suggest that a change in tactics may help to turn the tide.

For instance, try arriving at your favorite hunting spot around ten o’clock in the morning instead of prior to dawn which does several things for you as a turkey hunter. For one, it allows you to approach the hunting area and the birds from a different perspective and, it creates a new wrinkle for the birds themselves. In fact, just like Deer, Turkeys understand, and adjust to, hunting pressure. Thus, they too change their habits and even their territory if pressured too much. But, by allowing the birds to go through their early morning routine without harassment, then you create a quarry that is not on alert and therefore, is a bit easier to pursue.

But, it should be noted that success at mid-day Turkey hunting is subject to a lot of outside forces. For instance, the time of year, the amount of hunting pressure, the Tom to Hen ratio, and, the all-important number of satellite birds all affects the quality of the hunting. In addition, you should also remember that in some states, it is not legal to pursue Turkeys after noon. Therefore, these factors all affect the way you should approach mid-day Turkey hunting and, of course, it also doesn’t hurt that you get a few extra hours of sleep in the morning because, after a few early, unsuccessful, morning hunts, a little extra rest can reenergize your body and refocus your mind.

Therefore, assessing the situation is the first step to productive “ten to two” Turkey hunting. In fact, to be successful during the mid-day approach, you must first fight the urge to jump out of the truck and strike a call immediately. Instead, if you are in an open area, take the time to glass the area thoroughly before moving on. Also, look closely around shaded areas because birds will tend to loaf and hang out in shady areas during the middle of the day. Then, if you do not see any birds, make your way to high ground and set up but, you should only call from a position where you can conceal yourself once you get a response to your call.

Also, Turkeys are known to be less vocal during the mid-day hours but, if a responsive bird is located, they can be very aggressive and very quick to come to a call. Therefore, it is important to be ready for a bird to show up out of nowhere! On the other hand, for those of you who hunt in the deep woods, glassing is often not a viable option. So, instead make your way to high ground and listen for a period of time. As in open areas, you should also call sparingly in the deep woods; listening for a long period of time after each calling session. In addition, remember that during the spring, male Wild Turkeys are focused solely on creating and maintaining a harem of hens and the birds that are successful at this will protect these harems from other mature males and gangs of “Jakes” (immature male Turkeys).

However, these harem groups are always a problem for Turkey hunters because they are the ones that lead not only the dominant Toms away from our calling, they also draw away the satellite males and it’s important to remember this because, while most female Wild Turkeys will mate with the dominate Tom tending the flock, often times, satellite Toms along the edges of these flocks can sneak in and successfully breed an unattended hen (although most of this activity occurs from the initial “fly-down” at dawn until mid-morning when most of the hens have been bred and are no longer interested in courtship). Consequently, once the Hens in the flock lose interest in the males, the boys go lookin’ for love.

So, although hunting during this time when attending Toms go looking in all the wrong places is not an exact science, positioning yourself in an area after the birds have gone through their normal morning routine can produce some fantastic hunting opportunities. Therefore, next time you feel frustrated by “henned up” long beards, give them a little break and try calling around ten and you may very well find yourself pleasantly surprised!