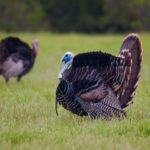 In the Spring, the countryside starts to wake up from its long Winter’s nap and hunters who have long since put away their bows and guns start to get the itch to go hunting even though deer season has long since come and gone.

Thus, it’s during this time of year that you are likely to run into hoards of camo clad men checking out the new Turkey hunting gear at your local sporting goods store and, without fail, the aisle that draws the most attention (and the most argument) is the aisle that holds this year’s newest Turkey decoys. There, the top manufactures in the business display their newest products in fancy boxes whose contents are not only guaranteed to draw a mature Tom into gun range, but whose packaging is also designed to draw in buyers!

In fact, most turkey hunters look at the decoys they use as a necessity that is as important to their hunt as their box-call or their shotgun. Also, there are countless different types of decoys and is seems that all of the companies that make them claim that they make the best and/or most realistic decoy on the market.

Thus, unless it is illegal (and in some states it is), just about every turkey hunter you encounter will be carrying a “deek” or two. Furthermore, while some hunters prefer to use a lone Hen decoy, others prefer to set out entire flocks of these foam impersonators.

Consequently, there are scores of companies that produce realistic Hen, Jake, and even strutting Tom decoys and they use everything from foam bodies to real feathers to help the lowly woodsmen entice a Long Beard into gun range. However, although the style and number of decoys used in any given set is up to the hunter, flocks of turkey decoys are not necessary as one or two will usually do the trick. In addition, there is something to be said about not only the realism of a decoy, but its packability and durability as well. So when you choose a turkey decoy, make sure you take these things into consideration.

In addition, when used properly, Hen decoys can be very effective, as long as the situation allows for ease of set up and there is a slight breeze to give the decoy some movement because, similar to duck hunting, the lack of movement in your decoy or spread of decoys can raise a red flag that will alert any savvy Long Beard to the fact that something is just not right. But, when created with other Hen decoys, a flock set up can be extremely effective at luring Toms into gun range and these types of setups are especially successful in open country where the flock can be seen at a distance. In fact, for some really hot action, try using a small Jake decoy as part of your hen flock set up.

This will often cause dominant, and even subordinate, satellite Toms to approach your set because both types of turkeys absolutely detest the sight of a Jake in the midst of a rafter of Hens. Thus, a great deal of the time, approaching Toms will ignore all the Hen decoys in a flock and proceed directly to the lone Jake in the setup. For this reason, it is paramount to place the Jake decoy closer to the hunter than all the other decoys. However, there is one caveat to hunting over a Jake or Tom decoy: it is best not to use either type of decoy on public land because it is simply too dangerous.

In addition, the introduction of full strut Tom decoys a couple of years ago really revolutionized turkey hunting. In fact, when they first appeared, there were scores of DVDs and outdoor shows playing clips of Toms flogging and destroying these strutting decoys mere feet from hunters and camera men and this exciting, in your face, action made for some great TV and, of course, it produced the results the decoy manufactures anticipated. Consequently, the sale of full body strutting decoys skyrocketed but, it didn’t do the average turkey hunter justice.

The reason for this is that it has been my experience that the use of full strut Tom decoys actually scares the majority of birds and causes them to turn tail and scat rather than bringing them closer. Therefore, full strut Tom decoys work great when there is one or two dominant birds in an area and you can set up on those specific birds but, more often than not, those birds are tending their harems and are not easily found.

Consequently, the satellite Toms (2 year old birds that hang out around flocks of hens but are not the dominant bird) are the Turkeys that most hunters take because these birds will come to calls more readily than a dominant bird that already has a harem of hens. But, they are easily spooked by the strutting decoys because the decoys are displayed in a dominant fashion with their tails up and their wings down and, having gotten their tail feathers ruffed up more than once during the Spring mating season, these subordinate birds usually shy away from a fight and will leave your strutting decoy (and you) alone.

However, regardless of which type of Turkey decoy you choose to employ, remember that every decoy has a time and a place that makes it most effective. Therefore, it is best to do your homework the next time you’re faced with the choice of purchasing a new turkey decoy and decide how and when you will use it or if you even truly need it or not.