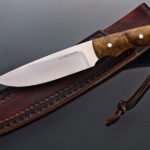 Many hunters spend years developing their skills in pursuing their chosen game species in order to be able to successfully harvest the animals that they choose to hunt. In addition, they also often spend numerous hours studying firearms and ballistic charts, various brands and types of archery equipment, and even different types and patterns of camouflage clothing in order to determine the best possible choices for their intended purpose.

However, many hunters fail to give the same consideration to their choice of a hunting knife even though a good hunting knife is every bit as essential to a successful hunt as the proper firearm, cartridge, and bullet design or bow, arrow, and broadhead.

In fact, while choosing a hunting knife may seem as simple as finding one that it aesthetically pleasing to you, the truth is that blade design, blade length, and blade steel all play a significant role in how well any given hunting knife performs. Therefore, in the following article, you will find the information you need to enable you to choose the best possible hunting knife for field dressing your favorite game animals.

Thus, the first step in choosing a proper hunting knife for the type of game that you prefer to hunt, is to choose the proper blade design. Therefore, you should to be aware that knife blade designs are available in four different types consisting of Clip Points, Drop Points, Straight Backs, and Trailing Points and, the reason that this important is that certain designs tend to be better suited for particular purposes than others.

For instance, the Drop Point blade design is by far the single most popular hunting knife blade design among hunters and it is distinguished by a straight spine (the thickest part of the blade) that extends forward from the bolster or handle and then displays a continuous, convex, curve to the tip of the blade so that the tip is positioned below the spine and near the center line of the blade for greater control when performing precision cuts.

On the other hand, the Clip Point blade design has a straight spine that extends forward from the bolster or handle for some distance and then incorporates either a straight or concave drop to the tip of the blade so that it appears as if that section of the blade has been “clipped” off. 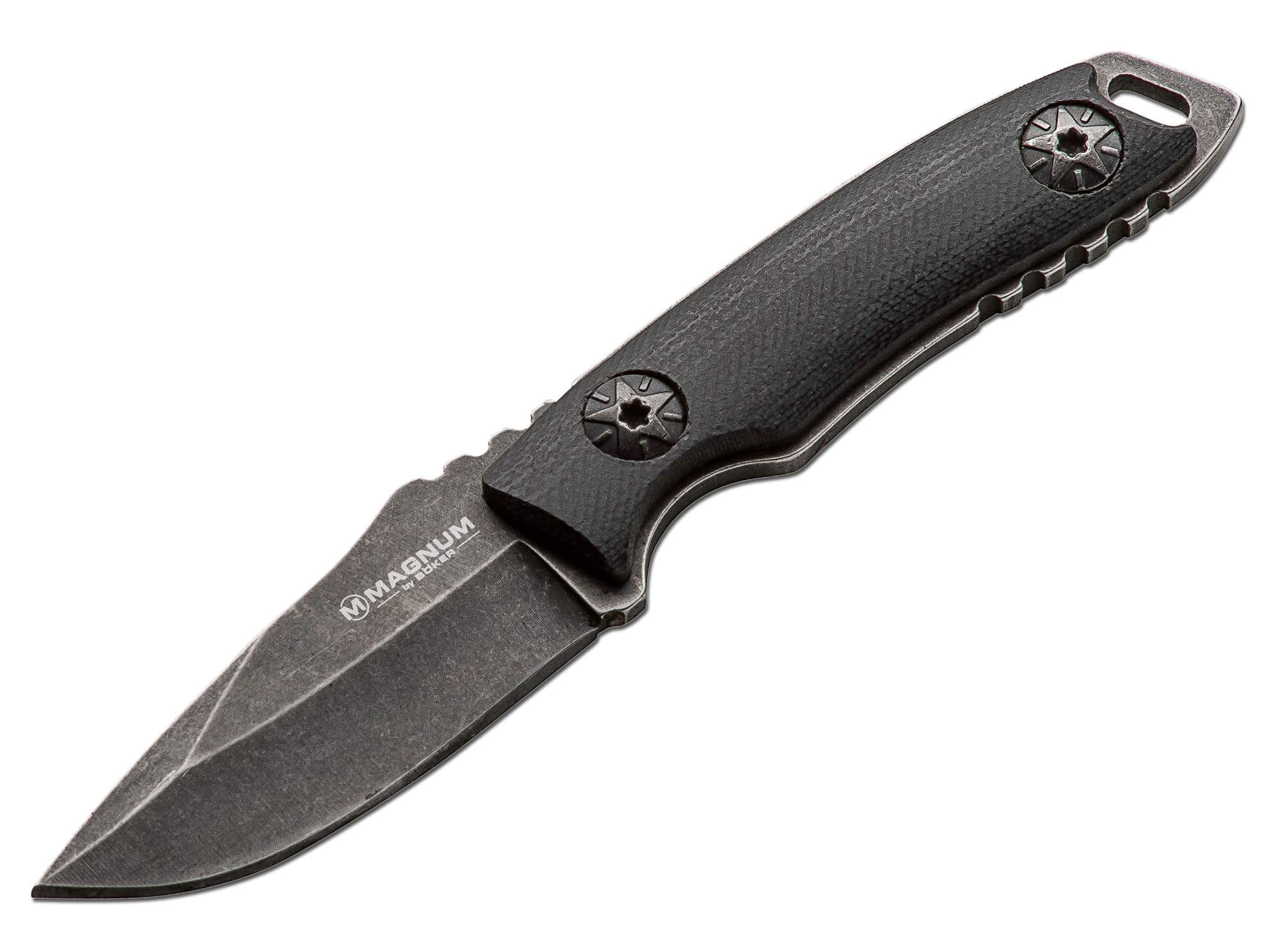 The third most popular blade design for hunting knives is the Trailing Point which incorporates a long, concave, curve along the length of the spine such that it positions the tip of the blade above the spine which increases the length of the cutting edge but, at the same time, lessens the amount of control the hunter has over the tip of the blade. 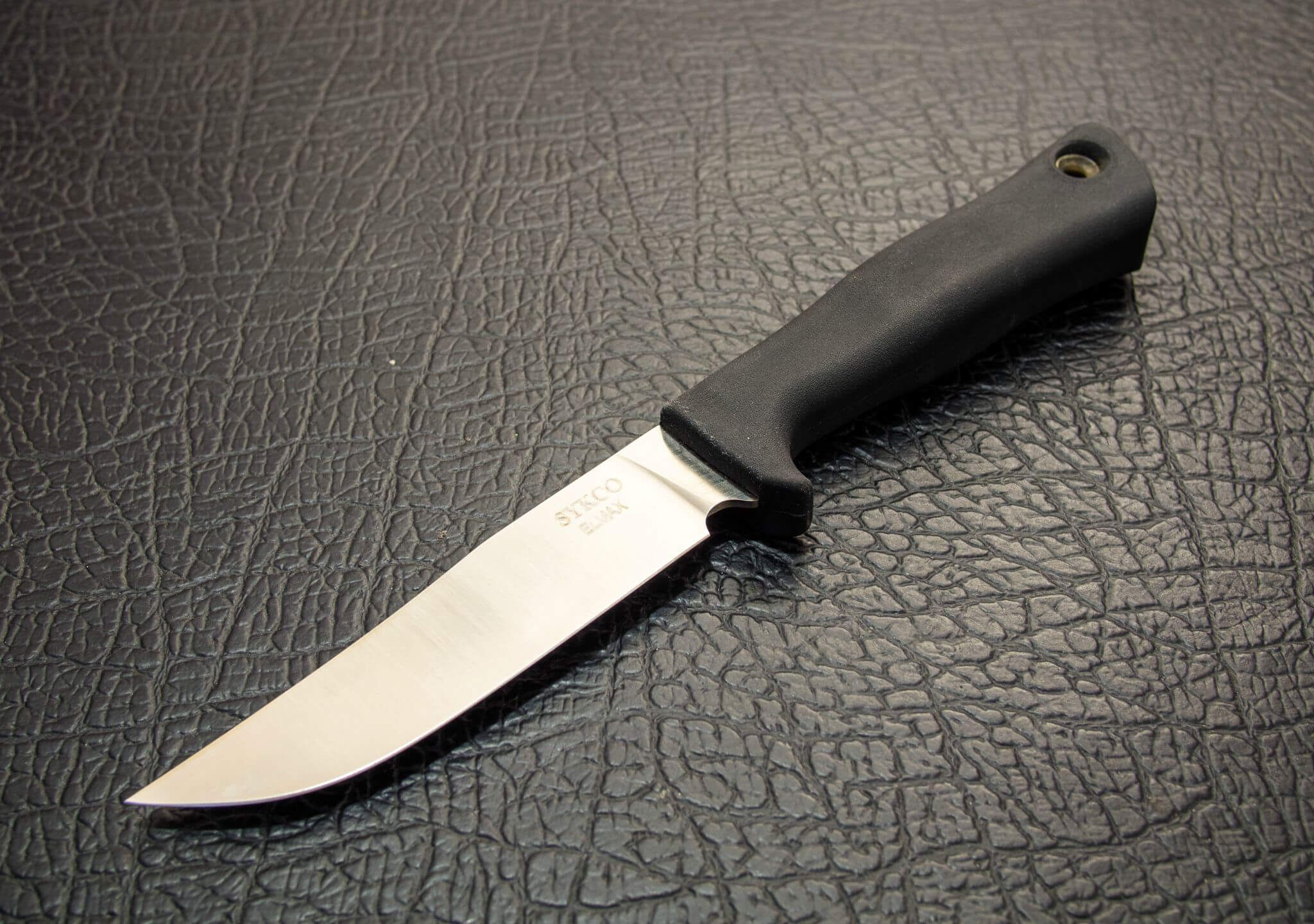 Therefore, when skinning animals with loosely attached hides such as deer, elk, antelope, and sheep, both clip point and drop point blade designs tend to work best because the skin of these animals is attached to the muscle tissue via a thin membrane which is easily parted with the tip of the blade.

When removing the hide from this type of animal, the knife can be held nearly perpendicular to the animal’s spine and only the first 1/2 to 3/4’s of an inch of the tip of the blade is needed to separate this membrane from the muscle tissue.

Consequently, when skinning these types of animals, both the Drop Point and the Clip Point are excellent choices because they provide the hunter with precise control over the tip of the knife. But, when skinning animals such as feral hogs, the skin of these animals is very tightly attached to the muscle tissue via al layer of tough, subcutaneous, fat and thus, the hide of these animals is significantly more difficult to remove.

So, when removing the hide from these animals, it necessary to literally carve the skin from the carcass and thus, a Tailing Point blade design tends to work far better than either a Clip Point or a Drop Point because the concave curve of the spine greatly lengthens the cutting edge which better facilitates the long, slicing, strokes that enable a hunter to more easily remove the skin from the carcass.

However, because the tip of the blade on a Tailing Point is positioned above the spine, the hunter has significantly less control over it than with a Clip Point or a Drop Point blade design and thus, trailing points are not well suited for precision cutting. On the other hand, both the Clip Point and Drop Point blade designs are far better at puncturing than a Tailing Point is and this difference is most apparent when you start to cut a circle around the anus in order to remove the intestines from the animal’s internal body cavity.

When hunting feral hogs, it’s a good idea to carry a folding knife with a drop point blade design for making the initial cuts around and down the legs and along the length of the abdomen as well as around the anus in combination with a fixed blade Trailing Point design for removing the hide.

But, it should also be noted that when performing jobs requiring fine control such as when skinning small game animals or capping the hide from large game animals, both Clip Point and Drop Point blade designs are a far better choice.

A short knife blade is far easier to control with precision than a knife with a long blade is and yet, short knife blades have far less reach than longer blades do. On the other hand, while a longer knife blade provides you with significantly more reach which is very useful when skinning larger game animals, it also provides you less control over the tip because it is farther away from your hand.

Therefore, most hunters tend to compromise by purchasing a knife with a 4” blade. But, for skinning small game animals such as squirrels and rabbits and, when capping hides, knives with a 3” blade are often a better choice.

On the other hand, when removing the hide from medium sized game animals such as antelope, whitetail deer, and mule deer, many professional hunting guides tend to prefer a knife with a 5” or 6” blade because the longer blade allows them to work with their hand farther from the carcass and to reach deep into the pocket that is sometimes formed when skinning along the ribcage.

The third factor you should consider when selecting a hunting knife is the type of steel it is from. Therefore, it is important to note that blade steels are distinctly divided into two separate categories consisting of stainless steels and non-stainless steel and, a “stainless” steel is defined as a steel that contains at least 12% Chromium (depending on which definition you prefer).

In addition, blade steels can be either very hard which enables them to hold an edge for extended periods of use or, they can be very tough which enables them to withstand the lateral forces generated when prying apart vertebrae or prying a hip joint from its socket. But, as a general rule, stainless steels tend to be harder and thus, more brittle that non-stainless steels but, because they are harder, they also tend to hold an edge better.

Whereas, non-stainless blade steels tend to be tougher than stainless steels but, they also tend to not hold an edge quite as well and they require more care to keep them corrosion free. In addition, it should be noted that the more Carbon a blade steel contains, the harder it will be and thus, the better it will hold an edge but, as I mentioned earlier, hard steels are also more brittle than tough steels with a much lower Carbon content.

So, when choosing a hunting knife design, you should first consider what type of game animal you intend to use the knife for and choose the blade design, the blade length, and the blade steel accordingly. Also, the knife should be both aesthetically pleasing to you and feel comfortable in your hand.

After your initial impression leads you to a knife that you really like, then consider the blade design, the blade length, and the steel from which the knife is made, as well as the overall size of the knife before making a purchase.

In addition, rather than expecting one knife to meet all of your various hunting needs, you should also consider purchasing a separate knife for each particular purpose or type of game animal you intend hunt such as a large knife for large game animals, a smaller knife for medium sized game animals, and a small knife for skinning small game.