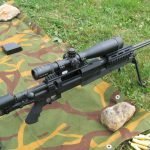 Are you looking for an accurate rifle scope to help you hit your targets? If so, you may be wondering about the specs that come with a scope. Here is a brief guide on the parts of a scope, their effects, and what you should look for when purchasing a scope.

The invention of the rifle scope as an adaptation of the telescope revolutionized the art of long-range, precision shooting. While there are some unconfirmed stories of a couple of famous, old Buffalo hunters such as “Wild Bill” Cody, who were sometimes able to hit a Buffalo at 1,000 yards with their Sharps 45/70 and 45/100’s and their Vernier peep sights, this type of precision shooting was far beyond the ability of the average shooter.

However, the concept of attaching a specialized telescope to the top of a rifle suddenly made the art of long-range, precision shooting available to a much wider range of shooters. Today telescopic rifle scopes are so deeply embedded in our collective hunting and shooting psyche that the idea of having an open-sighted, long-range rifle seems foreign to us! If you purchase a rifle scope to mount on your favorite rifle, you should know what critical features to look for. You should also know how to compare features.

Tto start with, you first have to know that a rifle scope consists of either a single-piece or a multi-piece metal tube that contains a series of external and internal glass lenses along with an adjustable aiming device called a Reticle. You need to understand that all rifle scope lenses are made from optical-quality glass because high-quality glass provides the clearest possible image.

You must figure out how to identify each part of a rifle scope and its purpose. You need to understand how each feature of a rifle scope affects its performance to have enough knowledge to compare one rifle scope to another and, thus, be able to evaluate the merits of one brand or model of a rifle scope over another to determine which scope is best suited for your particular purpose.

Parts of a Scope

Rifle Scope Specifications: How They Affect Accuracy and Shooting Experience

How to Choose the right Rifle Scope for You

So, now that you understand what all the different parts of a rifle scope are and what function they perform, as well as the many different features available on modern rifle scopes, what features do you look for when purchasing a rifle scope?

That depends on what type of hunting or shooting you intend to pursue. If you are hunting at close range, in heavy cover, with low ambient light, you might want a fixed power scope with a magnification of 1.5X to 3X (provides a larger exit pupil) with either a Duplex or a Target Dot Reticle.

If you are hunting over the large agricultural fields of the Mid-West or on the open ranges of the West, then you would want a scope with a variable power range and either fine or medium crosshairs because the vast majority of your shots are likely to be taken at ranges of 100 yards or more.

When hunting in low ambient light conditions, you would want a scope with a large objective lens to collect the maximum amount of light possible for the clearest image. Remember that when you increase the magnification of a rifle scope, you also decrease the exit pupil size. A rifle scope with a larger objective lens will provide a brighter sight picture at higher magnifications because it has a larger exit pupil.

The type and number of coatings on the lenses are important because they affect both the amount of light transmitted through the scope tube and the clarity of the sight picture. The more coated lenses and coatings each has, the better (but more expensive).

Chose a scope with the correct amount of Eye Relief for the caliber (amount of recoil) of the rifle you are shooting and for your particular shooting style.

Furthermore, suppose you plan to shoot a lot at very long ranges. In that case, you should consider a scope with high-profile target/tactical turrets to quickly and easily adjust your bullet’s point of impact due to wind speed, elevation, or humidity changes. Look for a model with a Parallax Adjustment Ring. This will enable you to quickly and easily adjust the amount of parallax in your scope for a clear sight picture at varying ranges.

Last, you want to purchase a waterproof and fog-proof scope. Scopes filled with an Argon/Krypton gas mixture are better than those filled with Nitrogen gas because the Argon and Krypton atoms are significantly larger than the Nitrogen atom. The Krypton and Argon atoms are less likely to migrate from the hypertonic atmosphere inside the scope tube to the hypotonic atmosphere outside the scope tube.

I'm an outdoors writer and gear reviewer. I love exploring new places, hunting big game, and spending time with family and friends in the woods. I'm always looking for new ways to improve my hunting and fishing abilities, and I hope you'll find our articles helpful. Here you'll find tips and information on everything from outdoor camping to hunting deer, elk, and moose and tips on how to get the most out of your outdoor adventures.